P.J. O’Rourke’s career can be defined by lots of laughs and lots of stereotypes, both of which may not age well, but which seemed awfully entertaining at the time. 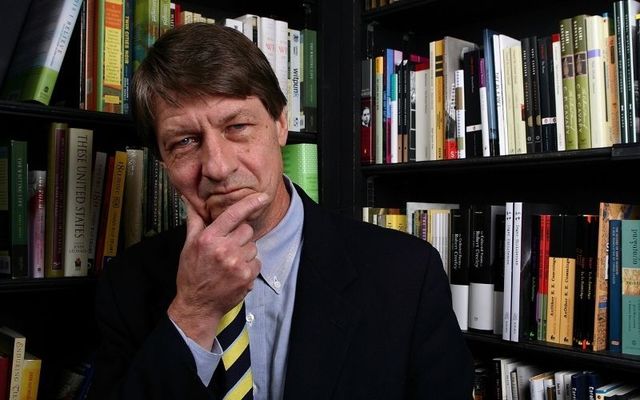 During a 2007 interview with Irish America Magazine, humorist and political commentator P.J. O’Rourke said that growing up among Irish Americans in Toledo, Ohio was a “huge inﬂuence.”

“The Irish I knew,” O’Rourke added, “seemed to be divided into the kidders or the hitters. And I had the good luck to come from the kidders. So all my family relationships were conducted in terms of kidding each other.

“I never heard one O’Rourke say to another O’Rourke anything completely in earnest. I guess we Irish have a limited repertoire of the ways we cope with things. There’s laughter, there’s hitting, there’s drinking.”

Or as he put it another time, “When you’re working class, Irish Catholic, like to read, don’t like to get up early in the morning and lift heavy things…what do you do? You can be a priest or a newspaper reporter. So what’s it gonna be, whiskey and women, or just whiskey? Or as it turns out, altar boys, but we didn’t know that back then.”

There you have P.J. O’Rourke’s career. Lots of laughs, lots of stereotypes, both of which may not age well, but which seemed awfully entertaining at the time.

O’Rourke died earlier this month at the age of 74.

It may seem hard to believe in these days of Covid and insurrection, but there have been lots of rough and ugly moments in the past few decades. Commentators like O’Rourke made them slightly more bearable.

“History has provided sages who have beheld the grim and gruesome and have somehow come through with a smile -- or at least a smirk -- on their faces,” Dave Shiflett wrote in The Wall Street Journal.

“Among them is P.J. O’Rourke…he now belongs to the ages which are no doubt happy to have him.”

O’Rourke was invariably described as “conservative,” which is fair enough since he mercilessly mocked liberals, not always an easy thing to do when you write for Rolling Stone or Vanity Fair or The Atlantic, as O’Rourke did.

And even in death, O’Rourke helps us see an important point about ideas and ideology in our culture.

A theme running through many of O’Rourke’s obituaries was just how unusual he was, simply because he made millions of readers laugh while also proudly flapping his right-wing.

“He was that rare conservative who appeared to be having a better time, and doing better drugs than everyone else,” Dwight Garner wrote in The New York Times.

“He was well-read; he was, it often seemed, the only funny Republican alive.”

The point here is hard to miss: Lefties are the ones who speak truth to power, sometimes in the streets with their fists raised, but also with irreverent humor.

That can only work if you are facing off against stuck-up, grim-faced snobs who are easily offended.  This is why so many famous comics and comedians are not just proud progressives, their enemies and censors are, by definition, repressed conservative prudes.

But the times have a’changed.

These days, wherever you happen to stand on the political spectrum, it kind of seems like it's the right-wingers who are having all the fun. And it’s the lefties who are doing all the unfun work, maintaining standards of decorum, and preaching -- lots of preaching -- about what is right and wrong, fair and unfair, acceptable and unacceptable.

It’s the right-wingers who are using sarcasm and irony, hand signals and bumper stickers, to crack jokes.

Yes, “Let’s Go Brandon!” is tired and played out.

It’s also a horse that liberals would have ridden into the ground if such an episode unfolded during the Reagan years.

Irish American right-wing activist James O’Keefe has made a career out of appropriating what were once lefty tactics. You may not think he’s a funny Republican. But lots of other people do.

Meaning P.J. O’Rourke was not on a one-man mission.

That lefties simply don’t get the joke may very well be the point and helps explain the mess we all currently find ourselves in.