Tom Brady called time on his glittering NFL career following the Tampa Bay Buccaneers defeat to the LA Rams in January. Could he now be set for a move into politics? 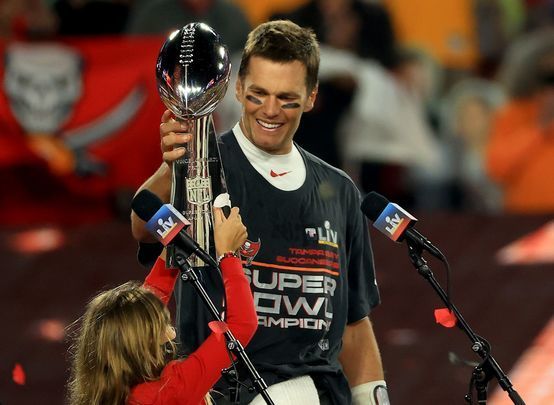 Tom Brady with the Vince Lombardi Trophy after winning the Superbowl with the Tampa Bay Buccaneers in 2021. Getty

“I’m not a football fan, by which I mean that I can count on one hand the number of football games I have sat through in my life,” Leary recently noted.

But during his freshman year in college in 2018, Tom Brady and the New England Patriots were playing the Philadelphia Eagles in the big game.

“I was in enemy territory,” Leary wrote in The American Conservative, where he is a columnist and editor.

“Only one of the dozen or so guys I was watching with actually came from anywhere near Philadelphia, but they were all at least not from Massachusetts, which meant one thing: They hated the Patriots. In particular, they despised Tom Brady with vitriol typically reserved for war criminals, pedophiles, and people from Connecticut.”

Leary, though, was from Massachusetts.

“Which meant that all their anti-Brady hatred was concentrated in my direction. Every play that favored New England was punctuated with shouts of ‘f** you, Brady! F*** you, Leary!”

On Sunday, of course, we had a rare Super Bowl without Tom Brady, who has (at least for now) retired from football.

But Leary is among those thinking Brady could very easily move from the football field to another hard-hitting pastime – politics.

“Though (Brady) spent the last two years of his career in Florida with the Tampa Bay Buccaneers (and comes from California by way of Michigan), he remains a Massachusetts icon, and it is with that greatest state in the union that he most closely identifies,” Leary wrote.

“Given the timing of his announcement, his friendship with President Trump, and his superstar popularity, some have begun to speculate that the quarterback is going to launch a political career.”

Specifically, Leary believes that Brady could and should run against Democratic U.S. senator and liberal icon Elizabeth Warren from Massachusetts.

“My instinct is that it would be virtually impossible for Tom Brady to lose an election in Massachusetts. If even I feel such intense loyalty to the man, I can only imagine the feelings he inspires in people who actually care. (Efforts by the liberal Boston Globe to manufacture a controversy over Brady’s supposed snub of Boston in his retirement announcement are, I think, clearly intended to preempt just such a run.)”

If Brady’s future could be described as bright and on the right, the same could be said about Leary’s, even if he is literally half Brady’s age.

The New Republic recently ran a story headlined “The Radical Young Intellectuals Who Want to Take Over the American Right.”

The magazine added, “They hate the establishment. They want to destroy the system. Meet the illiberal upstarts trying to remake conservatism.”

Leary was featured prominently in the article.

“Importantly, most of them are Catholic,” wrote Sam Adler-Bell of the right-wingers. “The church has always had an allure for conservatives with its strict rules, hierarchies, and status as an institution bestriding antiquity and modernity.”

Still, Leary, the Irish Catholic, is a bit unusual.

“Generally people expect that if you have radical politics, you converted,” said Leary, described as “a rare Cradle Catholic in the bunch.”

Adler-Bell adds that Leary “can be rather droll and speaks in a world-weary tone belied by the occasional postpubescent voice crack.”

But Leary speaks the right’s language passionately and fluently.

“All law is imbued with moral character,” he says. “Let’s stop pretending otherwise, and just acknowledge which morals we’re trying to legislate…and then commit ourselves to them.”

Does the world need another Ancient Order of Hibernians conservative?

To his credit, Leary’s got plenty of smarts and a sense of humor. He avoids the manic mouth-frothing of your Hannitys and the silly working stiffery of your O’Reillys.

He may soon want to get in touch with that point of view.

Because if Tom Brady needs a speechwriter…