Tom Brady the Irish underdog is the greatest of all time 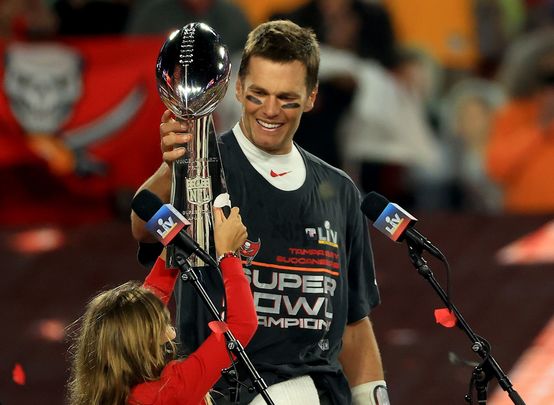 Tom Brady’s MVP award in his tenth Super Bowl wrote another extraordinary chapter in his career. Indeed he is the original Irish underdog success story.

In a year like no other a  good news story, one full of heroism and underdog battles, was badly needed. Step forward, Tom Brady.

Brady’s entire career from high school to college to the NFL Draft was so unpromising that by the 2000 draft you would have got huge odds of him even making the roster of an NFL team.

He was selected 199th in that famous 2000 draft that saw five quarterbacks picked ahead of him. He was an afterthought as a player, one who had to share the starting job at Michigan and was considered too slow, too skinny \,and too predictable to be an NFL starter.

He was used to beating the odds though. As Bob McGovern wrote in our sister publication Irish America Magazine in 2006:  “He was always a fighter dating back to his competitive family. Brady’s story began in the city of San Mateo, California, a suburb near San Francisco. Tom, affectionately known then and now as “Tommy,” was the youngest of four children and the only son of Tom and Galynn Brady.

"Tom’s three sisters, Maureen, Nancy, and Julie were stellar athletes and each was ultra-competitive in her respective sport. Maureen was an all-American softball player, Nancy was at the top of her class in basketball, and Julie was one of the best soccer players in the area. Needless to say, the Bradys were a competitive family, one that strove for victory and suffered with every loss, no matter the sport or the participant.”

His father, Tom Brady Senior, remembered how tough a start it was.

Tom enrolled in Junipero Serra Catholic High School, an all-boys school six blocks away from his home. As soon as he could he began playing football but quickly learned just how much work he would have to put in to even get on the field.

Brady was the backup quarterback for his junior varsity team and watched as his squad went 0-8, never scoring a touchdown.

“He wasn’t even worthy to get on the field for an 0-8 team,” Tom Sr. says with a laugh. “He really worked hard after that, he really wanted to be the starting quarterback his sophomore year, and after working hard he got the position.”

From there he went to Michigan. His first college pass was a touchdown, unfortunately, it was an interception, and opponent UCLA scored.

When drafted by New England, Brady was thought to have no chance of taking the starting job from Drew Bledsoe.

As Irish America Magazine noted: “Brady entered the 2001-’02 season as the backup to seasoned veteran Drew Bledsoe. In the second week of the season, the Patriots were playing the New York Jets, when the history of the franchise changed with one hit. Jets linebacker Mo Lewis broke through the Patriots’ offensive line and demolished Bledsoe. The hit left him reeling and it was later discovered that he had sheared a blood vessel in his chest.”

Bledsoe was finished and Brady was on his way. Thus began the rise of a legendary underdog.

Tampa Bay’s victory with Brady at the helm was his tenth Super Bowl appearance and his seventh win. It will simply never be beaten --and he has no intention of retiring. He might play until he’s fifty!

He has beaten the odds and then some. He says it was his underdog Irish spirit that kept him focused, however -- but no doubt his Irish temper was up when he was picked in the second last round in 2000.

Tommie was obsessed with football, but the high draft pick made a professional career prospect look bleak. Brady’s father remembers the hell the family went through as he was picked 199th and in the sixth round.

As Bob McGovern wrote: “On Saturday, the first day of the draft, Tom went out to play golf with his father to cut some of the tension. The rest of the family stayed home, watching every pick, praying that he would be chosen."

The next day, as Tom sat with his family and watched, each pick was a crushing blow to his ego.

“Every time they called a different name, it was like someone slit your wrists,” Tom Sr. says. “It’s a killer, because I saw what my son went through.”

By the end of the fifth round, Tom went upstairs to watch the draft by himself. When it got to the sixth round he got up, went downstairs with a baseball bat and told his family, “I need to go for a walk.” His father says, “I was worried about all the cars in the neighborhood.”

A few minutes, and no vehicular damages later, Brady walked into the living room just in time to see that he was picked by the New England Patriots as the last pick of the sixth round.

“We were just happy he got drafted,” Julie says.

Now he is arguably, the greatest athlete in American history

His great-grandfather was from County Cavan and his great-grandmother, who hailed from County Cork, were both immigrants from Ireland who came to the States during the potato famine. They could never have imagined such a story.

For all Irish and Irish-American fans of the gridiron, knowing that one of the greatest to ever don an NFL shirt is proud of his Irish blood is always a Super Bowl moment. As the Irish say. “Ni fheicimid  a leitheid aris.”--” We will never see his likes again.”