The Irish have been an important influence on the Supreme Court Justice since he was a kid. 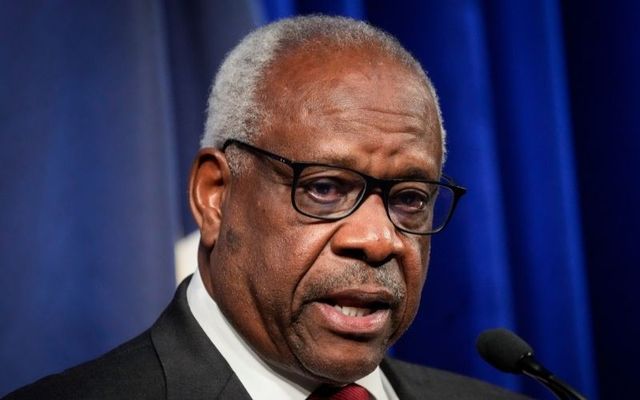 Before Eddie Jenkins embarked upon a 1970s career in the National Football League, he was recruited to attend the College of the Holy Cross in Worcester, Massachusetts, and in doing so became connected to future Supreme Court Justice Clarence Thomas.

Thomas, and the rest of the Supreme Court, have been in the news a lot lately. Some of the news has been historic, what with hearings about the first black female nominee set to begin later this month.

Some of the news, though, has been more disturbing.

But back to Eddie Jenkins. It was the late 1960s at Holy Cross, and Thomas was a year behind Jenkins. It seemed like everyone had their fists thrust angrily into the air.

Jenkins himself was described as “passionate in his politics,” and recalled taking a ride “in a battered old car” with another Holy Cross student-athlete, an Irish American basketball player with strong opinions about Northern Ireland.

Jenkins wanted to see “what this group of Irish American kids was doing to help their comrades across the Atlantic,” Diane Brady wrote in her 2012 book Fraternity, about Jenkins, Thomas, and other African Americans at Holy Cross.

A man from Belfast was there to bring it all to the IRA.

This is the activist environment in which Jenkins, and Thomas, came of age.

Which is ironic, because recent reports remind us that the conservative-leaning Thomas dislikes activism.

The New Yorker just ran a long, uncomplimentary article about Thomas and his wife.

“That morning, before the Stop the Steal rally in Washington, D.C. turned into an assault on the Capitol resulting in the deaths of at least five people, (Ginni Thomas) cheered on the supporters of President Donald Trump who had gathered to overturn Biden’s election. In a Facebook post that went viral, she linked to a news item about the protest, writing, ‘love MAGA people!!!!’”

Then came a long uncomplimentary article in The New York Times Magazine, which lingered on Thomas’ Catholicism.

Justice Thomas saw parallels between how the church grew and how to build a body of conservative jurisprudence,” the article reads.

“It’s very similar to what happened with the Catholic Church in the Middle Ages,” said one Thomas admirer, who added “that the church and its institutions ‘did their work during that time, laying the foundations for future Catholic thinking and Catholic thought to sort of grow the church and preserve its traditions.’”

Holy Cross students, and many faculty, tended to be Irish Catholics from New England. So, you can bet that influenced Clarence Thomas.

The Irish, in fact, had been an important influence on the future Supreme Court justice since he was a kid.

Thomas has spoken, in particular, of Sister Mary Virgilius Reidy. In one interview, before she died at the age of 100 in 2013, Thomas said: “(Sister Mary) is an Irish immigrant. She went in the convent in 1931. She was originally…at Augustan at Immaculate Conception and then she came to Savannah (Georgia)…She was unyielding in her attitude that you would do well. It was consistent with my grandfather’s attitude because I mean, as a kid, I’m 12, 13 years old. I want to do what 12- and 13-year-olds do. I want to have fun and my grandfather’s view, and hers, was that we did not have the luxury in the ‘50s to have fun, that we had an obligation to perform and to do well.”

After hearings later this month, a second African American, Ketanji Brown Jackson, is expected to join Thomas on the court.

At least the Protestants finally catch a break.