OPINION: Ireland's neutrality has to end

"It is well past time that this Triple Lock policy was scrapped and that Irish legislators and people are given back full control of the actions of their Defence Forces." 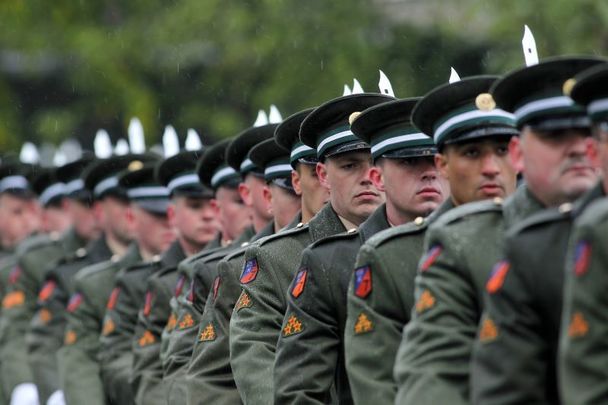 With the temperature rising across Europe and anxious glances being cast eastward, it was an opportune time last week for the Irish government to publish a report into the Defence Forces (DF).

Drawn up by the Commission on Defence Forces and taking just over a year to complete, the report listed a range of options and recommendations but stayed well clear of the bogeyman in the room – Ireland’s traditional neutrality.

This omission, while significant, is hardly surprising, but surely It is well past time that we had an adult discussion on this issue which has become a meaningless concept in today’s world when threats are generic and global as in the case of cyber-attacks or terrorism.

Neutrality has been elevated to a virtue by successive Irish governments which have hidden behind it when hard questions are raised about our military and the resources required to face current day challenges.

Ireland is not politically neutral and has supported western democracies in many conflicts over the decades, from World War II right up to Afghanistan where landing and refueling facilities were made available to the US military and the CIA rendition flights at Shannon Airport. On a regular basis, we adopt common positions with our EU partners on geopolitical issues.

What is handcuffing Irish foreign policy, however, and our ability to join military alliances, is the so-called Triple Lock. This is the policy that governs the armed forces' involvement in conflict and states that there must be a UN mandate for any such action, it has to be a decision of the Irish Parliament, and it must come within the remit of Irish defense legislation.

Critics contend that this effectively restricts foreign policy options and that as a sovereign state, Ireland should not have to depend on the UN to grant legitimacy for how it acts, especially as the decisions of that body can be vetoed by one of the five permanent members on the Security Council.

In fact, the Triple Lock policy could in certain circumstances be in contravention of the Irish Constitution which states in Article 4.5 that “nothing...shall be invoked to prohibit, control, or interfere with any act of the Defence Forces during the existence of a state of war or armed rebellion.”

One example would be if there was an attack on Europe, not such an outrageous scenario in the current climate.

Yes, we have battle groups where Irish forces cooperate with the armies of other EU states with the objective of being able to respond to crises as and when they occur. The purpose of these groups is limited to undertaking operations, including humanitarian and rescue tasks, as well as peacemaking and peacebuilding, conflict prevention, and post-conflict stabilization. But once again, for Ireland to be involved UN agreement is required.

It is well past time that this Triple Lock policy was scrapped and that Irish legislators and people are given back full control of the actions of their Defence Forces.

The idea that Russia or China should have a veto on what constitutes a morally acceptable action by Ireland is very disturbing. What if Irish citizens were under threat in civil unrest in a Chinese-supported country in Africa? Currently, we would just have to wring our hands and rely on the kindness of strangers, assuming a peacekeeping operation by the UN was vetoed by China.

This is not such an unlikely scenario as the Chinese did just that in Macedonia when their opposition to an ongoing UN peacekeeping mandate led to its collapse. A subsequent EU-led mission went ahead without Irish involvement as it didn’t have the Security Council imprimatur.

A constitutional amendment that linked the Triple Lock to either agreement by the UN or the EU, or else that said any proposed military intervention would require over 75 percent support in the Dáil, would surely satisfy most people here. What’s clear is the current position is no longer tenable and this self-imposed constraint should be removed.

But their place in the world is not the only issue facing Ireland’s army, navy, and air force. The commission in its report was quite scathing in its assessment of current and past government stewardship.

This can be seen by the collapse in government commitment over the past two decades. Spending as a percentage of GDP has been in sharp decline over the last two decades from 0.7 percent of GDP in 2000 to a level in 2020 of less than half that amount, 0.3 percent. This is the lowest percentage of any of the EU’s 27 member states.

The report concluded that there was a disconnect between the stated policy of government and resources and capabilities made available. It suggested that there is an urgent need for clarification of the level of ambition for the roles of the military, and recommended that the Defence Forces should step up to what it calls level of ambition two. This is identified as building on current capability and addressing specific gaps in infrastructure and manpower.

But there is a price tag to achieving this objective and it’s not cheap. The government would need to commit to upgrading infrastructure including a bespoke radar system, modernize its fleet of aircraft and ships as well as increasing its focus on special forces and cyber security.

In terms of manpower, the report talks about re-training and upskilling, employing outside specialists, and increasing the capabilities of the reserve forces. All this is estimated at a spend of an extra €500 million a year.

Given that there is a long lead time in the delivery of new military capability, decisions need to be taken soon, the minister with responsibility for defense, Simon Coveney, has promised an action plan within months.

However, the army has its own problems to address in the short term. The commission called out the culture within the forces which it categorizes as masculine with limited appreciation of diversity of all kinds.

This tallies with revelations made on an RTÉ radio program which highlighted a series of abusive relationships involving bullying, discrimination, and sexual assault between male and female serving soldiers, with female professional careers ruined. This culture, according to the commission, is compounded by the inadequacy of existing grievance processes, where there is a reluctance to engage due in many cases to fear of reprisal if complaints are aired.

The government has sidestepped calls for a commission of investigation by promising a judge-led review of the allegations, a position that has been rejected by the Women of Honour representative group.

What the outcome of all these reviews, investigations, and reports will be is anyone’s guess. But it’s a safe bet that Irelands Defence Forces will be unrecognizable in 10 years’ time unless, of course, the government does what governments do best and procrastinate. After all, we are a neutral country.

*This column first appeared in the February 16 edition of the weekly Irish Voice newspaper, sister publication to IrishCentral. Michael O'Dowd is brothers with Niall O'Dowd, founder of the Irish Voice and IrishCentral.