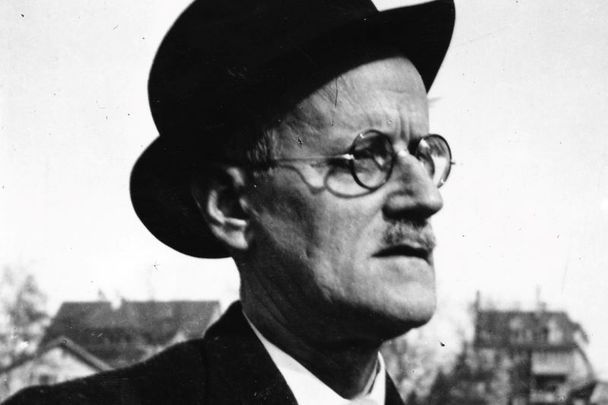 Joyce candidly declares in the final lines of "Finnegans Wake" that he has given the keys to his impenetrable book after a portmanteau word ‘Bussoftlhee’ followed by ‘lps’(lips) and scholars have agonised over it ever since.

The final pages of Joyce’s swansong are considered to be among the most moving passages of prose ever written. As the extraordinary narrative of the book unfolds, its hero Finnegan soon takes on a slew of pseudonyms quickly becoming HCE (Humphrey Chimpden Earwicker aka Here Comes Everyman, Howth Castle and Environs), Humpty Dumpty, Persse O’Reilly, Hosty, and numerous others.

The giant Finnegan has a major fall like Tim Finnegan, the hod carrier who falls off a ladder to his death only to return to life when a barrel of whiskey is thrown over him at his wake in the rumbustious ballad "Finnegan’s Wake" which inspired the title of Joyce’s swansong.

Finnegan of Joyce’s final novel has another great fall - some unspecified misdemeanour in Phoenix Park and his wife Anna Livia Plurabelle rescues him. His extraordinary comic story of triumph and redemption fans out to embrace the rise and fall of all humanity hence "Finnegans Wake" (without the possessive).

Joyce was unusually tight-lipped about the model of the hero of his final novel but, a significant early clue is that Finnegan (or HCE) is an important man who left Dublin. (French, then a stage and literary celebrity, left Dublin and relocated to London in 1900 when Joyce was 18.) "Finnegans Wake" opens with a wake for the dead giant, Finnegan celebrated in a pot purri of song fragments all grafted together in which Percy French’s ballad “Phil the Fluter’s Ball” is most prominent.

The late professor Vivian Mercier in a 1956 essay astutely identifies that French’s song “Phil the Fluter’s Ball” is thematic in the "Wake" and he expressed bewilderment at the degree to which Joyce ‘parodied a fellow parodist’ and presciently declared that if we knew that we would unlock the key to Joyce’s swansong.

Over three decades later, Bernadette Lowry completes the riddle. Lowry, who first encountered French while working on his biography in the Oriel Gallery, Dublin from 2000-2005 stumbled upon a highly literary and heretofore unexplored weekly comic gem languishing in scholarly neglect in the NLI, "The Jarvey." It had been edited by Percy French from January 1889-January1891, ran to 104 editions and 1,700 pages, and straddled the high point in Parnell’s career and the dramatic split in the Irish Parliamentary Party. Parnell was occasionally lampooned in "The Jarvey" and, like many others, such as Queen Victoria and Edward VII, was brought down to size, occasionally speaking in the flattest brogue, no doubt to the huge indignation of the snobbish John Joyce, James Joyce’s father.

When Lowry examined "The Jarvey" she was so struck by its Joycean flavour and its literary and comic brilliance that she determined to do some scholarship on the untouched jewel and knew instinctively that it couldn’t have escaped James Joyce. She was right. Some eyebrows were quietly raised at the mere chutzpah of her book title, especially her plucky inference that French (and "The Jarvey") is the ghost that haunts Joyce’s inkbottle.

But, quietly assured of her ground, she has produced a book that surely proves her right: It is surely impossible to dispute her ground-breaking detective work and its significance for Joyce studies. She uncovered chunks of French’s "Jarvey" in "Finnegans Wake" which structurally frames the "Wake" and provides much of the organisational scaffold for the book:

French has a slew of pseudonyms in "The Jarvey" and sometimes these pseudonyms are shared with other contributors especially the publisher RJ Mecredy for whom Joyce seems to have harboured a particular grudge.

This structure is replicated in the "Wake" where the hero has numerous pseudonyms and characters often share composite identities.

Lowry also found the French-Collisson opera "Strongbow" in the "Wake" and it too is heavily thematic: The opera was French’s first effort after the tragic death of his first wife, which dramatically flopped in 1892 and had to be taken off the stage when The Freeman’s Journal, where Joyce’s father had powerful connections, staged a protest outside the theatre.

How it chimes with the "Wake" is that in its chorus, French met and fell in love with his second wife-to-be, Helen Sheldon. Helen sometimes shares an identity with Anna Livia and she rescued a very bereft and doubly dejected French who fell passionately in love all over again and robustly reconstructed his life from the shipwreck of tragedy and personal loss and humiliation. French’s other operas: "The Knight of the Road," "Noah’s Ark," and "Freda and the Fairies," his lectures on Napoleon, and his comic story on Cromwell also lace the "Wake" and chime with its themes. Numerous fragments of his songs and parodies saturate it too and Lowry adds an extra 12 song references to the 13 already detected. French published a number of his "Jarvey" stories as booklets in the “Rush Light” series in the 1890s and early in the "Wake" Lowry found a reference to Finnegan’s “rush lit”. Clearly, Joyce had these booklets but disposed of all the evidence, fully living up to his declaration on leaving Dublin that he would use the ‘arms of silence, exile and cunning.’

The overarching breakthrough was Lowry’s detection at a crucial page early in the "Wake" of the passing of the giant Finnegan in Liverpool. The reference amazingly escaped all Joyceans in eight decades even the late Vivian Mercier. Percy French died suddenly of heart failure aged only 65 in the home of his cousin in Liverpool in January 1920 on the way back from what would be his final performance in Glasgow. As Joyce juxtaposes the reference with two of Moore’s melodies that was a real Eureka moment for Lowry. It is from the more cheerful of these melodies that Lowry gets her most lyrical title "Sounds of Manymirth on The Night’s Ear Ringing."

As she proves, Joyce was indeed very familiar with French’s parodies of numerous Moore’s melodies. For example, French re-wrote Believe Me If All Those Endearing Young Charms as Believe Me If All Those Funeral Charms as a jarvey desiring to run down ‘the Moore of Dublin’ as he drove his jaunting car past the inferior statue of ‘the man in the iron mourning cloak’ on College Green. A selection of these efforts by French are published for the first time in her book.

She convincingly argues that Moore’s melodies are signifies and code breakers throughout the rest of the "Wake," and the melodies uncloak French’s identity as the hero. She also underscores that French famously parodied the nursery rhymes in the style of the great classical poets and, as fragments of nursery rhymes saturate the "Wake" these too act as signifiers to French in the deeply encrypted book.

Lowry had a second major Eureka moment shortly after publishing when she decoded the portmanteau word “Bussoftlhee” in the last three lines in the famous Anna Livia Plurabelle (ALP) monologue of "Finnegans Wake." She uncoded it as “Buss of Ethel” the Kiss of Ethel. Ethel was French’s tragic first wife who died a day after their first wedding anniversary in June 1891.

She had written a gossip and fashion column in The Jarvey called Chit Chatters, which crops up, Lowry found, all over "Finnegans Wake" and informs the ALP gossiping washerwomen in the book. The name Ethel is used with typical Joycean linguistic flamboyance in the "Wake" when, replicating her fashion column, he refers to her as an ‘elegant type of girl wearing a very dressy affair known as an ethel’.

Beyond this, Lowry also points out that French’s song “The Fortunes of Finnegan” a highly comic song about an indestructible giant is, along with “Phil the Fluter’s Ball”, overarchingly thematic in the comic story too as is his forgotten take on the Sean Van Vocht where French presented himself in a pun on his surname in “The Next Landing of The French” as a foremost member of Ireland’s ‘stranded gentry’ his personal manifestation of the ‘poor old woman’ cult.

Towards the end of Joyce’s swansong, Finnegan is said to ‘make old grandma to grunt and grin again’ and this theme is carried throughout the book.

It flows in a highly readable and engaging format and is very accessible and easy to follow and contains a wealth of historic information and a number of detailed appendices which demonstrate the voluminous extent of French’s literary oeuvre.

It is hard to see how anyone could dispute her theory underpinned as it is with so much new evidence. It is perhaps little wonder that the Joyceans remain silent for now.

After eight decades, surely she proves beyond doubt that the hero, the singular giant Finnegan of the cosmic Finnegans is none other than Percy French and his tragic first wife Ethel, especially in their glorious, if fraught "Jarvey" endeavours, the traumatic demise of which, as Dr. Martin Mansergh in his historic overview astutely identified, coincided with the demise of Parnell as did so much, including the beginning of Joyce’s own father’s slide into eventual destitution. That Joyce and especially his father, envied French, seems indisputable and the hostility at the mischievous comic slights to Parnell undoubtedly had a far more personal edge.

Lowry makes a compelling argument too that Joyce is French’s comic heir and shared his passivism and his distaste for conflict in the affairs of the world. Both were cosmopolitan in art and temperament and were never in thrall to the narrow shackles of historic divisions or the less palatable manifestations of historical and tribal allegiances. A fascinating literary can of worms has been opened in this book, which is full of original new material, with an insightful historic overview by Martin Mansergh.

A milestone in Irish cultural studies this study marks a watershed moment in Joyce studies. It quietly ripples in the world of Irish literary and historic culture in the shadow of the "Ulysses" centenary but can only expands in time into an ocean of new scholarship. With its pioneering findings, it surely unlocks "Finnegans Wake."

On the last page of the "Wake" after ‘Bussofthlee’ (the kiss of Ethel) Joyce says “lips” to indicate a kiss and declares the keys to "Finnegans Wake" as “given.” Surely, Bernadette Lowry has now unlocked the Wake having identified the meaning behind these keys: keys that reveal the identity of Finnegan and finally blow open "Finnegans Wake?"

So, where are all the Joyceans and why do they ignore this astonishing book and reject the portals of knowledge that are laid bare by these crucial, landmark finding? How long will they turn their backs on revelations of such staggering import?

"Sounds of Manymirth on the Night’s Ear Ringing Percy French (1854-1920): His Jarvey Years and Joyce’s Haunted Inkbottle" by Bernadette Lowry, with a historic overview by Martin Mansergh, is published by Carmen Eblana Productions and is available from carmeneblana@gmail.com.