She's seen as a hero in Ireland, but Bill Donohue is attacking Catherine Corless as a credential-lacking charlatan for her tireless Tuam mother and baby home research. 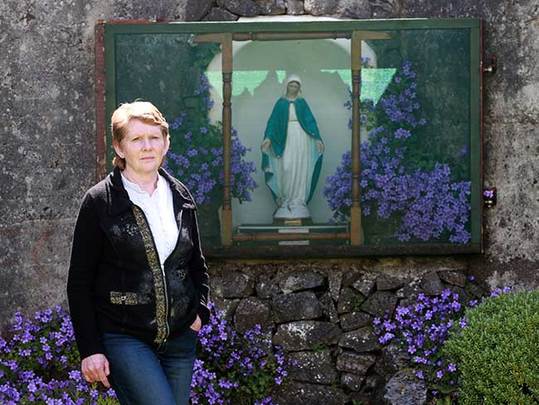 Catherine Corless on the grounds of the former Tuam Mother and Baby Home. Photocall Ireland

When you can’t win an argument you attack the person making it. It’s a bait and switch ploy as old as politics. It’s what you’re reduced to when the jig is really up.

Bill Donohue, president of the Catholic League, has finally made that calculation about Catherine Corless, the woman whose painstaking research uncovered the truth about the 796 babies buried without a marker in the Tuam Mother and Baby Home in County Galway.

The Tuam mother and baby home was described as “a chamber of horrors” by the Taoiseach (Irish Prime Minister) Enda Kenny. Last month a state-appointed inquiry found “significant human remains” in several underground chambers at the Tuam site and tests confirmed the bodies ranged from premature babies to three-year-olds.

But instead of thanking Corless for her persistence in bringing the horrifying tale to light, Donohue this week blasted her as a credential-lacking charlatan who isn’t qualified to conduct the meticulous research that led to the discoveries.

“Contrary to what virtually all news reports have said, Corless is not a historian,” Donohue sniffs in his latest media blast, “She not only does not have a Ph.D. in history, she doesn't have an undergraduate degree. She is a typist…”

A typist! How could someone so academically inconsequential tilt at the Catholic Church and hope to prevail? The idea is an absurdity.

“This does not mean she is dumb – many secretaries are brighter than the professors they serve,” Donohue continues, again looking down his nose at her perceived social insignificance. “Nor does this disqualify her from making a contribution to historical events. But she is no historian.”

Read More: How she did it – the heroic Irish historian who broke the Tuam baby scandal

Perhaps she would have been more accepted if she had one of the many degrees, doctoral and such, that so  many of the pedophile priests and those who covered up for them had. Donohue’s exaggerated respect for anyone with a collar shows the deep insecurity and craving for respect the poor man has.

There’s no question Donohue occupies a more elevated social strata than the Irish women he relentlessly attacks. Tax records for 2013 show he was paid a salary of $474,876. That’s a hell of a lot of money to write poison pen letters and accuse grandmothers of exposing the church.

If typists can’t write can divorced men like Donohue lead right-wing Catholic organizations and tell us all what to think?

There is no end to Donohue’s pomposity. Donohue continues: “Those who think I am being too harsh should consider what happened when Corless tried to obtain information from the Galway County Council to facilitate her research. She was told to take a hike – she was denied access because she lacked a university degree…”

Doubtless, they would have refused information, too, to college dropouts like Bill Gates and Michael Dell and Evan Williams, co-founder of Twitter.

His condescension is unmistakable, but this is Monday-morning-quarterbacking of the most pathetic sort. Nevertheless, Corless persisted until she obtained the death records, made the discoveries, alerted the world, and the Irish state investigations confirmed her findings.

From an early age, when she shared classrooms with the "home babies" as the children of unmarried mothers were known, Catherine Corless sensed something was very wrong about how the children from the Tuam home were treated

Later, as an adult, she undertook the research from a purely humanitarian point of view believing those lost souls deserved that their stories be told and an accounting made for how horrifically they were treated. She dug out the truth and it was not pretty

Donohue can’t deny any of this, so he’s mounted a pathetic rearguard attempt to attack her standing. In Ireland, she is considered a national hero, but Donohue’s mocking tone makes it clear that in his eyes she is nothing more than a bumptious peasant who somehow got above her station to discredit the Church and tell lies about its operations.

Perhaps she lacks his increasingly gilded paychecks, but she has already done more for the truth by displaying Christian virtues such as charity and compassion than the sclerotic Donohue ever has.