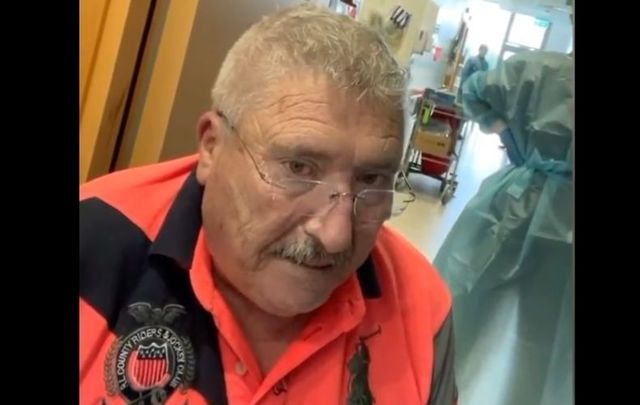 Donegal man Joe McCarron, who died of COVID on Friday, September 24. He was featured in a viral video leaving Letterkenny Hospital against the advice of doctors. Twitter

The internet has proved that half of us would prefer to create alternative facts (and our own reality) than ever face up to the real one.

Last month, another chilling story about the hidden dangers of online activism made the news in Ireland.

It happened in my home county of Donegal, which has always prided itself on being a place apart, a place where locals keep their own counsel and come to their own conclusions, rather than be dictated to by the mandarins of Dublin.

This particular story involved a 75-year-old Donegal man from Dungloe diagnosed with Covid-19 (the conservative-leaning county has often had the most cases in the nation). Somehow, the news reports confirmed, a group of anti-vaccination protestors had got his details and released him from hospital.

In the video of the release, which of course was widely shared online, doctors can be heard pleading with a man, named Joe McCarron, not to leave their care. But the protestors can also be heard assuring him that if he stays there he will die. They will force you into intensive care and you will pass away, they tell him.

So let's pull the camera back a moment. On one side, you have serious medical experts and on the other, you have self-appointed online activists. They ask Joe to make a fateful choice: medical doctors or conspiracy theorists. Joe chose the theorists. A week later, he died of Covid-19.

I don't blame him for what happened, he was frightened, and - because social media has become a kind of wild west for snake oil sellers - he no longer knew what or who to believe.

He is far from alone in this. We seem to be living in a golden age of human ignorance. Why? Because the internet, heralded in the 1990s as an egalitarian and democratizing influence, has instead been responsible for the erosion of our democracies, chipping away at common civility and political consensus worldwide. 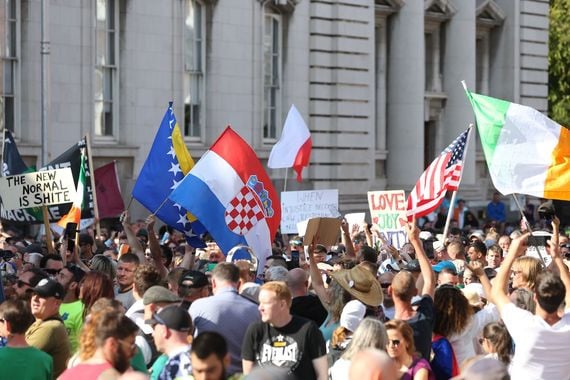 It turns out the party propaganda that used to bolster authoritarian regimes has nothing on apps like Facebook and Whatsapp. Recall how Trump howled at the loss of his bully platform on Twitter. He understood it had led to his rise and that it underscored his fall. Without Twitter to snipe at his enemies and elevate his interests, he would never have become president.

We now live in a world where the landslide 2020 presidential election can be twisted into a sinister behind-the-scenes theft by online activists and their political enablers, meaning reality itself is under siege.

And some of the faults may be our own because the internet has proved that almost half of us would prefer to create alternative facts (and our own reality) than face up to the real ones.

Irish police are now examining the events leading to McCarron's death, but if you think about it, you can guess how much of this must have played out. Think of all the anti-vaccination comments you read from people you know or thought you knew on Facebook. Think of how they start by "only asking questions” and end by leading credulous pensioners to their needless, preventable deaths.

Because the internet gives equal time and value to the scholar and the oaf, we are living with the most dangerous threat to civilization since the arrival of the Dark Ages.

That's not hyperbole. The far-right, banished to fringes for decades after World War Two, have found a golden opportunity to recruit again online, by hijacking hot button social issues to smuggle in their contraband.

Attaching themselves to so-called internet controversies like transgender rights, anti-lockdown campaigns, or to out-there conspiracy theories like QAnon, they have hoovered up public support by playing bait and switch with tens of thousands of angry, credulous people who were looking for simple answers to hard questions.

Joe McCarron was “only looking for answers.” He was only looking for a little hope in a dark time. He was afraid and people who are afraid don't always make the wisest decisions. They can become susceptible to bad actors with hidden agendas.

These bad online actors are everywhere now in our politics and our public lives from the airport to the Walmart to Capitol Building to the hospitals. They have attached themselves to our hopes and fears and hope to shape our political paths in the years ahead.

Poor Joe McCarron had his path shaped for him. He was taken advantage of and used as a pawn in a much larger but hidden conflict between the forces of the far-right and the forces of science and medicine.

Human ignorance is a long straight road that only leads in one direction. When you're on it it can seem like a relief to have a clear path and to have escaped all the maddening uncertainties of our times. But the destination is always the same, and the long road only leads to ruination.