Members of an "anti-vaccine protest group" were asked to leave Joe McCarron's funeral in Donegal for not wearing masks and not social distancing. 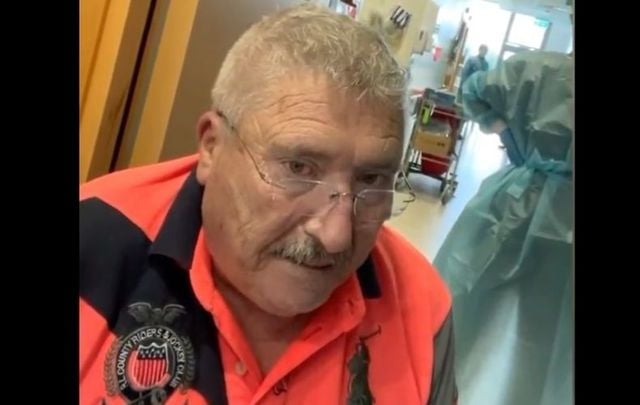 COVID patient Joe McCarron died in Donegal on September 24 after going viral for leaving Letterkenny Hospital against the advice of doctors.

At least five people were asked to leave the funeral of Joe McCarron, the Donegal COVID patient who went viral for leaving Letterkenny University Hospital against the advice of doctors only to return a few days later, for not wearing masks.

A Garda spokesperson said: “Gardaí received report of a number of people inside a church not wearing face coverings in Dungloe Co. Donegal on the 26th September 2021.

“Gardaí attended and provided advice to those present. No offences disclosed. Enquiries ongoing.

“Members of An Garda Síochána are not a ‘compliance officer’ in respect of these Regulations.”

An eyewitness told The Irish Times: “They were all sitting together while everyone else was sitting apart adhering to the guidelines.

“I knew two of them to see because of recent media coverage and from social media. They were definitely members of that anti-vaccine protest group.

“They were offered masks as none of them were wearing any. However, they declined and left without any fuss.

“They were not outside the church when the funeral was over and I certainly didn’t see them at the graveside when Joe was buried.”

McCarron, 67, died on September 24 roughly ten days after a video of him leaving Letterkenny University Hospital in Co Donegal with the assistance of anti-vaxxer Antonio Mureddu Gravegliu went viral.

In the viral video, a doctor pleads with McCarron, who was visibly struggling to breathe, to not leave the hospital. He ultimately left, only to return two days later by ambulance.

The incident is now reportedly being investigated to determine whether or not any criminal offense was committed by those involved.

Upon McCarron being readmitted to the hospital, his family issued a statement which said: "Joe is still in a critical but stable condition. He has serious lung damage from Covid-19 and is on a ventilator, but the signs are good.”

Speaking at McCarron’s funeral on Sunday at St Crona’s Church in Dungloe, Co Donegal, Father Eddie Gallagher said: “This is a very sad day, and we think of the bereaved who are brokenhearted on this day.

“The best gift, the only gift, we can give to Joe McCarron today is our prayers.

“The person who will miss Joe most of all is his wife Una,” Fr Gallagher said, adding “We offer our prayers and sympathy to Una who today is widowed and brokenhearted.”