Is the GOP's 'red wave' the spilled blood of the LGBT community?

If you target a community in a national campaign of unprecedented vilification, then violence will follow on from hateful speech like night follows day. 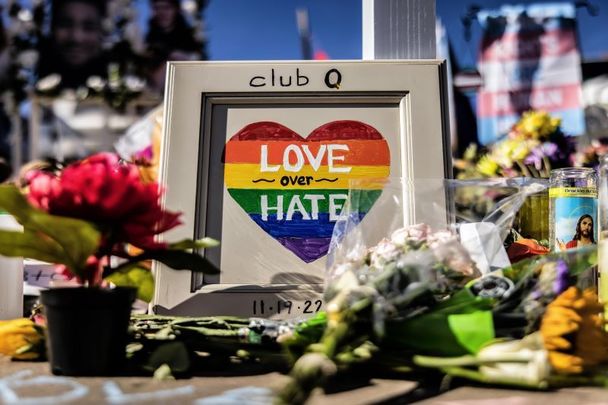 November 22, 2022: Mourners at a memorial outside of Club Q in Colorado Springs, Colorado. A gunman opened fire inside the LGBTQ+ club on November 19, killing 5 and injuring 25 others. Getty Images

Last week, I wrote about the Republican party's slate of anti-transgender and anti-drag queen bills and the ridiculously overheated, toxic rhetoric they contained.

This week, I have to write about an anti-trans and anti-LGBT mass shooting. These two are things are connected.

If you target a community in a national campaign of unprecedented vilification, ascribing to it the most sinister motives, the way Ron DeSantis, Marjorie Taylor Greene, Lauren Boebert, and their cynical mouthpieces in the media like Tucker Carlson have, then violence will follow on from hateful speech like night follows day.

As we saw, this strategy backfired at the polls but it just led to deadly consequences for the innocent people they have carelessly attacked.

The violence that hateful and intemperate language always leads to has arrived but the only red wave we are seeing now is spilled American blood.

All of these GOP leaders stayed silent when armed Proud Boys and other assorted Neo-nazi's started showing up to attack LGBT bars. They had little to say when those bigoted thugs started targeting people outside of their own premises. They refused to accept that their hateful language leads to hateful acts.

So at this point in this column, it's important to explain something you may not be aware of. The first thing you learn when you're LGBT is that nowhere in the world is safe. Not the schools, not the churches, not the main street, not even your own home.

People can and often will turn on you once they learn the truth, and this can include your own siblings and even your parents. It does something to you, to learn that the unconditional love of families often does not exist for people who courageously come out as LGBT. It strips away any sense of security you might have had once, or any belief in the goodness of people or the comforting illusions of religion.

Before you come out, you are carefully and repeatedly taught what will await you: ridicule, rejection, and emotional and physical abuse. Sometimes it's all four and even more besides. You are taught (or is that groomed) from early childhood just how deeply the wider world despises people like you and for that reason many LGBT kids don't even live to adulthood at all.

Women face some of these cruel social limitations, which are designed to oppress them and make them bend to the will of men before they even notice they have been manipulated, but LGBT people discover that their own condition is in many ways uniquely worse, because they are expected to be neither seen nor heard, ever.

NEW: @GLAAD has documented at least 124 incidents of anti-LGBTQ activists targeting drag events in 2022. The incidents took place in 47 states, with threats of violence ranging from open-carry assault rifles to firebombings.https://t.co/PoETYYtjQu pic.twitter.com/N4d7mpng4w

It's not just the society that oppresses LGBT people, of course, it's also the religions and the law and political leaders. Everyone seemingly has your number although none of them have bothered to know you or understand the world they have made for you.

For these reasons, any LGBT-affirming space offers a unique welcome and the prospect of some solidarity. Sometimes these spaces are social centers, sometimes they are clubs or bars or even destinations like Provincetown, located so far at the end of Cape Cod you have to drive all day to reach it.

When you are gay, you are told that any public expression of your existence, from holding hands to sharing a brief peck on the cheek when greeting your partner, is “shoving it down other people's throats.” You soon learn how far that claim extends, that in fact there isn't any room for you anywhere in life and if you still don't get the message then you could be hurt or even killed.

If the GOP bills to make attending a drag show with your family a fucking felony, the combat veteran who subdued the Colorado Springs shooter would not have been there with his family and many more people would have been shot dead.

LGBT clubs and bars are supposed to be safe spaces, but the shootings in Colorado Springs at the weekend say we are not safe even when we are out of sight. It says our critics don't want us to exist at all, quite literally.

Given those choices, what would you do? Would you hide in the shadows and hope not to be hurt? Or would you come out fighting?

If the GOP thinks they can legislate LGBT people out of existence, inspiring far-right thugs to make that promise quite literal, they will be surprised by the level of national pushback coming their way soon. Hide or fight? The decision was made this weekend.