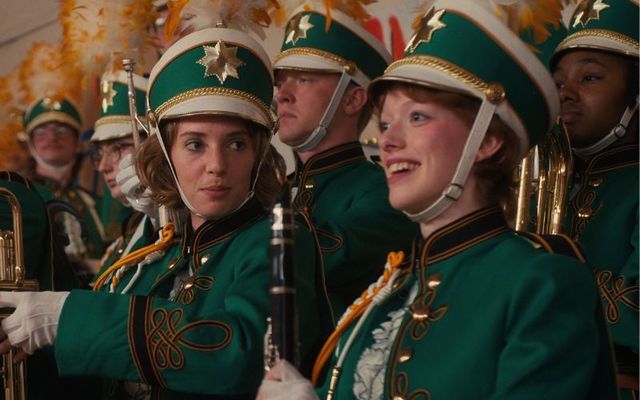 Amybeth McNulty, 20, is the Irish Canadian actress who grew up in Co Donegal and is now busy making a name for herself starring in some (literally) monster Netflix hits.

So the journey from Letterkenny, Co Donegal to Hollywood just keeps getting shorter. McNulty, 20, received her actor's training at the local An Grianan Youth Theatre in the town as a young teen before heading on to Netflix and the bright lights.

Fans of the hit show don't need to be told what a big deal this is, but McNulty says it best when she admits that because of the heightened attention, she has to wear sunglasses when she ventures out in London now, the city where she currently resides.

Considering that she only appeared for an instant in the first half of the new "Stranger Things" series, it's a new level of fame, and so it stands to reason that she'll be back in the second part of the series to help the Scooby gang in some way tackle the supernatural danger that surrounds them. Can she help solve any of this mystery?

“Oh, my God, right?” she earlier told IrishCentral. “It's so difficult because obviously, I've only been in one scene so far, right? And so you've got to wait until July 1. But you know, I'm there. I can't say much about it, which is so difficult. But you definitely see a friendship building with Robin, which is really sweet. And I'm just really excited for people to see that.”

Fans are intrigued to see what direction that friendship goes for what for many is their favorite part of "Stranger Things," the so-called Scooby gang.

“I mean, this series there are all these little groups kind of going around, and they are quite separate this season, because there's so many people. But it's so interesting watching them all kind of do their own things. And it's slowly just comes together, and it's nice to sort of be a little part of that. It feels really surreal.”

This is the correct reaction to seeing Amybeth McNulty in Stranger Things pic.twitter.com/CBooZV8yuC

It's one of the biggest shows on Netflix and McNulty's previous one, "Anne with an E" was also a major hit with a devoted audience (which finally ended its run in its third season). So luckily she has gone from one successful Netflix show to another, but she can't have failed to notice the sheer intensity of the fan engagement with "Stranger Things" which is just off the charts, right?

“It's surreal and just a bit mind-boggling, to be honest. I mean, when I was auditioning, I didn't know that it was for 'Stranger Things,' but I had some idea. Now it feels like I'm playing a role that I'm really not acting in. The Duffer brothers (the shows writers, directors, and producers) are so amazing with getting you involved in the character and the costume and how you want to look and how you want to be perceived.”

McNulty reveals she felt like she had a real say in how her character emerged and that was huge for her. “That was really new for me, instead of one who's obviously already written. You know, when you've got to kind of go along with what's already there. I enjoyed that.”

“Oh my gosh, absolutely,” she laughs. “I mean, getting into the costumes and trying them all on, including fun little earrings and the little boots and 80s stuff like that. I had a ball of the time.

"I love the music too. I was brought up by my grandparents and they grew up in the 1980s, so I got to feel like I really kind of saw that part of their life. It was amazing. I love that time and it was quite a contrast from the 1800s, which was when my last show was set."

Music from Kate Bush, the English and Irish pop singer, makes a key appearance in the series, which has led to a new generation discovering her music. Is McNulty a fan too?

“She's fantastic. Since watching that scene with Sadie (Sink) who plays Max Mayfield in the show, I've been listening to the song ('Running Up That Hill') on repeat, just kind of walking around or when I'm doing my wee runs. And I went back and I rewatched it in the show three times and then just texted Sadie, saying 'Oh my god, what was that?' It blew my mind.”

But when she gives refuge to a troubled young girl, she must choose between breaking her medical oath or crossing her very dangerous employers. It's the kind of film noir fare we have not seen McNulty starring in before and that's precisely the point.

“It was such a great project to work on just after I turned 18. It was a very different role, I played a kind of drug addict and possibly alcoholic homeless girl. The story's very dark.

"I think doing that after 'Anne with an E' was a real challenge for me, but it's exactly what I wanted to do. I'm really happy that now people can finally see it. It's gory but very emotional and I'm actually really proud of it.”

Meanwhile, now living in London and having just filmed her second Netflix show, she's ready for a little downtime to herself. “I'm taking a few trips to places right now and I'm just kind of being with my friends waiting to hear about a couple of new projects, waiting to see if they'll be green-lit. For now, I'm just enjoying the sun and taking some time for myself and my mental health, and playing with my little cat is what I'm most excited about for a couple weeks, then I'm gonna get right back into it.”

Where will her travels take her, I ask? “I was in Amsterdam a couple of weeks ago and it was beautiful. I'm going to be heading to Canada very briefly and then I'll take a quick trip to L.A. for the first time ever, just for a week in total. Then I'll probably come back and see if I can enjoy the festivals here in the summer in London. I'll sneak around in a pair of sunglasses but yeah, I'm really excited for it I'm really really lucky that I get to do it!”