Trump versus O’Rourke would be a contest for the ages; the Bobby Kennedy look-alike with many of the same policies against a president he will underestimate at his peril. 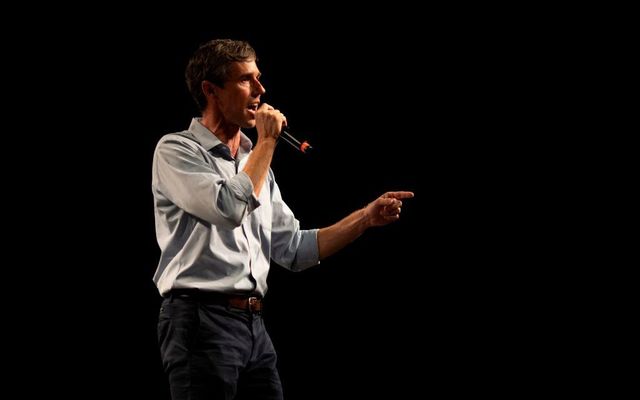 Texas Representative and Senatorial Democratic Party Candidate Beto O'Rourke delivers a speech at the University of Texas in El Paso, Texas, on November 5, 2018, the night before the U.S. midterm elections. PAUL RATJE/AFP/Getty Images

The odds of a Beto O'Rourke, Donald Trump 2020 standoff for president increased significantly this week.

Patrick, who is African American, had been Barack Obama’s favorite son in the 2020 race. Obama saw in him the same kind of optimistic candidate , a man capable of the type of outsider campaign that took him to the White House.

Deval Patrick is the latest moderate to announce he won't run for president, leaving Joe Biden and Beto O'Rourke as the favorites of Team Obama. https://t.co/ouXUpr9wHY pic.twitter.com/TBzBclwhxC

Patrick, however, had huge issues, not least the arrest of his brother-in-law on rape and assault charges. One can only imagine what Trump would do with that.

There was also his work with Mitt Romney’s old firm Bain Capital, bound to be a red flag for any Democrat running.

Obama and O’Rourke met this week with Obama saying the Texas congressman reminded him of himself with a crisp and different message.

.@BetoORourke met with @BarackObama as he ponders a 2020 presidential campaign. https://t.co/LiFqGYX3My

Then, Louis Susman, one of Obama’s chief bundlers, announced for Beto.

“It’s time to pass the torch to a new generation,” Susman told CNN.

“I have nothing against the Bidens and Kerrys of the world and all of these senators that are looking at it, but I think the Beto example is what inspired people and what we are going to need.”

There were reports of top Obama operatives in New Hampshire and Iowa linking up with the Beto folk.

Another sign? Bernie Sanders supporters have already begun attacking him from the left as not ideologically pure enough. Beto is doing something right.

Then there's the money. There will be up to 20 candidates running for the Democratic nomination. The ones with money will be able to advertise heavily in the early states, separating them from the pack.

Beto raised a stunning $80 million in the Texas Senate race he narrowly lost. I bet almost all those donors would come back. Given his proven success raising money from grassroots, O'Rourke could be king of the hill before a vote is cast in New Hampshire or Iowa.

There is the added possibility that Texas could turn blue if Beto is the candidate in the next election. O’Rourke ran Ted Cruz to a 2.5 point victory margin so that is no longer unthinkable.

That would be seismic. A blue Texas, along with blue California and New York would make a Democrat unbeatable in the electoral college.

Trump versus O’Rourke would be a contest for the ages; the Bobby Kennedy look-alike with many of the same policies against a president he will underestimate at his peril. Just ask Hillary.

Right now, it looks like it is O’Rourke’s to lose on the Democratic side but there will be many twists. If it is, we will witness a presidential race like no other between a young pretender and the man who holds the crown.

Do you think Beto O'Rourke should run in 2020 and does he stand a chance of winning? Let us know your thoughts in the comments section, below.