Should all Irish American politicians stand with Beto O'Rourke on NFL players taking a knee?

El Paso, Texas may sound like a strange place to find the next big name in Irish American politics, but Congressman Beto O’Rourke, 46, fits the bill. 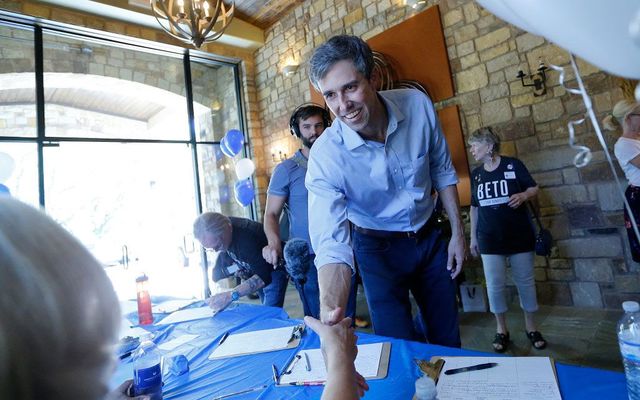 Texas Irishman Beto O'Rourke made an impassioned speech about why he believes there is nothing more American than the right to peaceful protest.

El Paso, Texas may sound like a strange place to find the next big name in Irish American politics, but Congressman Beto O’Rourke, 46, fits the bill.

He is running hard against incumbent U.S. Senator Ted Cruz, one of the most disliked politicians ever to hit Congress but a powerful force back in his native Texas. The latest poll by NBC shows him just four points behind.

Just last week O'Rourke's impassioned defense of the rights of NFL players to protest the National Anthem has gone viral.

‘I can think of nothing more American.’ — Beto O'Rourke — the man taking on Ted Cruz — brilliantly explains why NFL players kneeling during the anthem is not disrespectful pic.twitter.com/bEqOAYpxEL

Ironically, the Cruz campaign has been hitting O’Rourke on the issue of his Irish American background.  They say the Spanish nickname “Beto” is one he uses to convince the critical Hispanic voters that he is one of them when he’s really Irish. It must be the first time in a U.S. presidential election that someone got tagged with an Irish background as a negative.

Ironically Cruz has Irish ancestry too.  His mother Eleanor Darragh was born and raised in Delaware in a family of Irish and Italian descent.

O’Rourke, whose Irish roots go back four generations, is drawing buzz and attention like no other Democratic Senate candidate this year. If he is elected senator from Texas it will deal the GOP a severe blow and propel O’Rourke into the forefront of candidates for 2020.

The odds are long, but Cruz is beatable. Even Republicans agree.

Texas has not elected a Democratic senator since Lloyd Bentsen stepped down in 1993. In the interim, the Lone Star State has been ruby red with a sweep of governors, senators and the vast majority of House members.

O'Rourke may be the one to upset the applecart. In recent polls, he has been as close as two points behind Cruz in one poll to six points in another. The most recent has him at four behind, bad news for Cruz who has much greater name recognition.

Incredibly he has vastly outraised Cruz in the money game.  He raised $10.4 million in the last three-month period while Cruz only managed $4.6 million.

Just launched our first ad. Entitled "Showing Up," it's filmed using an iPhone and was created entirely with live stream footage from our travels to all 254 counties of Texas. Watch and RT to share. pic.twitter.com/INmmjlXX4Y

Then there is the incredible energy and commitment of the candidate who has visited every Texas county once and is embarking on his second reconnaissance trip to visit the 254 counties all over again. Texas is the size of France and Switzerland combined, making traversing the size of it a very impressive feat.

It is also the modern way he is making those trips. His journeys are live streamed, and while driving he holds forth on a series of issues. His hero is fellow Texan Lyndon B. Johnson, the president who gave America Medicare and Medicaid, Head Start and major civil rights legislation.

Then there at the volunteers, 10,000 of them who have flocked to O’Rourke from all across the country. O’Rourke is a tall rangy Texan with good looks and an all American family, a wife and three children.

Texas Congressman Beto O'Rourke addresses the press after he and other politicians visited the tent city June 23, 2018 in Tornillo, Texas, housing immigrant children separated from their parents because of the Trump administration's zero tolerance policy. (PAUL RATJE/AFP/Getty Images)

It seems to be working.  Huge crowds have begun turning up for O’Rourke’s rallies even in bright red areas of the state. A dislike of Cruz and hatred of Trump is fuelling many supporters.

It would still be a massive upset if he wins, but O’Rourke is giving it everything.

O'Rourke is a fourth-generation Irish American, born in El Paso, the son of Melissa Martha (Williams) and El Paso County Judge Pat Francis O'Rourke. He was nicknamed Beto, which is a common Spanish nickname for Roberto, before kindergarten.

His father was a political associate of former Texas Governor Mark White. Judge O'Rourke died in July 2001, at the age of 58, when he was struck from behind by a car while riding his bicycle over the New Mexico state line.

What do you make of O'Rourke? Let us know in the comments section, below.