Irish American Congressman to challenge Ted Cruz for US Senate

If Democrats want to retake the US Senate next year then candidates in red states like Beto O’Rourke must win. 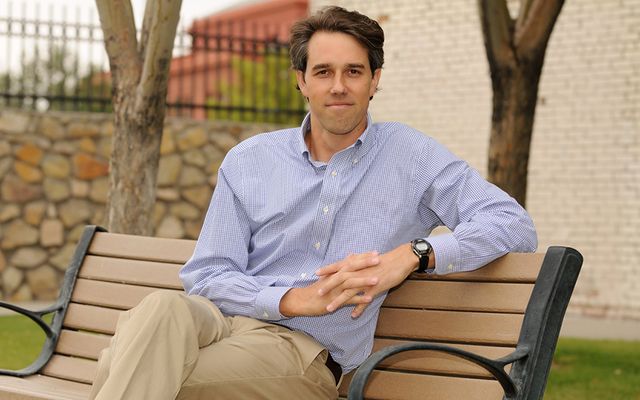 If Democrats want to retake the US Senate next year then candidates in red states like Beto O’Rourke must win. Beto O'Rourke for Senate

El Paso Congressman and fourth generation Irish American Beto O’Rourke has thrown his hat into the ring for the US Senate seat held by Ted Cruz.

Announcing his bid to topple Cruz, O’Rourke told CBS News, “People want a full-time senator. Someone focused on this state - not on running for President,” he said. “Someone who puts country before party and isn’t chasing big money, and believes public service is a calling and not a career.”

The bilingual El Paso native, 44, has represented Texas’s 16th District for two terms. Prior to that he was a City Councilman and had also spent three years in New York City working with internet startups.

He took on and beat eight term incumbent Silvestre Reyes in the 2012 Democratic primary - the real election in his heavily Hispanic district - campaigning on a platform of LGBT rights and a rethink on the war of drugs.

He married his wife Amy Hoover Sanders in 2005 and together they have three children.

Although Texas is traditionally a red state it has a growing Hispanic population and was one of the few states in the 2016 election that saw Hillary Clinton outperform Barack Obama’s 2012 campaign. That said, the last Democrat the Lone Star state sent to represent it in the Senate was Lloyd Bentsen in 1988 and Texans have voted for the GOP Presidential candidate at each election since Reagan defeated Carter in 1980. With a safe seat in the House, the announcement represents something of a career gamble for the floppy haired Irish American.

Read More: "Black Irish" Ted Cruz may face some birther questions of his own

With his would-be constituents historic antipathy to his party clearly on his mind, O’Rourke attempted to put some space between himself and his fellow Dems.

“I don’t know about the Democratic Party right now,” he said. “But anytime we are waiting for someone out of central headquarters, waiting to figure something out, we might as well give up. I just know what I’m hearing in Texas, and what I feel as a Texan. There are too many people who want to work and who are skilled and can’t find that work.”

Unfortunately for Democrats they face what Politico dubbed a “brutal 2018 Senate map”; of the 33 seats up for election 23 are currently held by Democrats, two more by independents who caucus with the Democrats and just eight by the GOP. To compound their problems, many Democratic incumbents will be fighting to reelection in states that Trump won by landslides. On the Republican side, they’ll be defending only two seats in “purple” states - Arizona and Nevada - and none in any blue states. So if the Democrats want to wrest back control from the GOP they have to gain at least one seat in a traditionally red state.

Enter O'Rourke. Stella O’Leary, President of Irish American Democrats, knows the Congressman well and says his strong connection to Ireland is unusual for a Texas Democrat. “I [was] surprised by the depth of his knowledge of Ireland and his fondness for his ancestral home,” she told IrishCentral. “It's something one doesn't expect in a Texan and he is the only Texas Representative who actively engages with Irish American Democrats.

“What motivates him is that he is a naturally talented politician who connects with people the way other Irish American politicians like Kennedy, Tip O'Neill and today Joe Crowley does.  He is a dedicated social progressive who sincerely cares about the welfare of the middle and lower economic Americans - not a fake in any way.  His values are the traditional Irish American values before the likes of Paul Ryan came along - those Irish who have forgotten where they came from.

“We will be working for him in his race against Cruz.”

But O’Rourke isn’t the only prominent Democrat with an eye on Cruz’s seat; fellow rising star Rep. Joaquin Castro will decide whether to bid for the seat by April and is likely to enjoy strong support from national Democrats.

And Cruz supporters were quick out of the trap after O’Rourke’s announcement. Jeff Roe, Cruz’s former campaign manager, was quick to declare the Congressman too liberal for Texans - doubtless the first of many social media shots that will be fired over the coming months.