As Ireland recovers from Ophelia, the next Atlantic Storm Brian is already to pummel the country with heavy wind and rain. 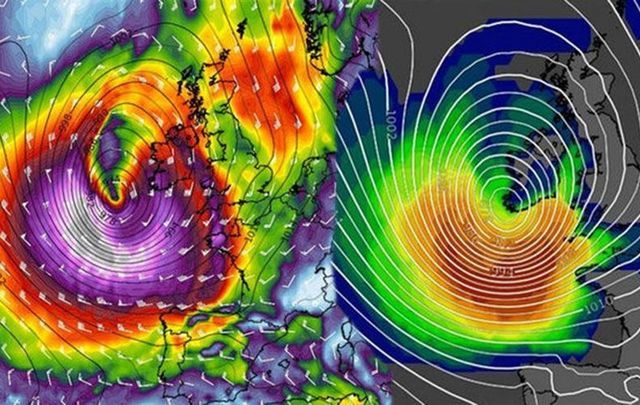 As Ireland recovers from Ophelia, the next Atlantic Storm Brian is already to pummel the country with heavy wind and rain.

Fears over Storm Brian are on the increase as the Irish weather service Met Éireann issues weather warnings across the country over the next coming days.

Just last Monday, Storm Ophelia pummeled Ireland, the largest Atlantic storm in 50 years leaving three dead and millions of euro worth of damage in her wake.

The country is getting less than a week in respite, however, until Storm Brian will reach its shores this weekend, bringing with it gusts of up to 68 mph (110 kph) and possibly up to 50mm of rain.

Status yellow weather warnings have been put in place across 14 counties in totall, and fast ferry crossings across the Irish Sea between England and Ireland have already been canceled for the weekend.

Heavy rains are already falling on Thursday with a weather warning in place until midnight tonight. Friday and Saturday are believed to bring the worst of the strong winds across the country.

It may take a bit more than an umbrella to battle Storm Brian this weekend. Image: iStock.

"Rain pushing eastwards. We've had 10mm to 20mm in the west overnight. Wet & cloudy for most of today, clearance from the west later,” they wrote early Thursday morning.

"An Atlantic Depression is expected to track eastwards over parts of Ireland on Saturday. South to southeasterly winds on Friday night will veer northwesterly on Saturday and are expected to reach yellow warning criteria, at this stage. There is potential for mean wind speeds of 50 to 60km/h [30 to 37 mph] and gusts of 90 to 110 km/h [56 to 68 mph], especially in coastal counties."

Heavy rain in the west early tonight. Spreading nationwide overnight and on Thursday. Heaviest in the south & east.
Yellow warning in effect pic.twitter.com/codFSLreHE

"Saturday will be a wet and windy day with strong and gusty westerly winds and heavy squally showers. Highest temperatures of 11C to 13C [52F to 55F] and feeling cold in the wind and rain.

"The weather will improve for Sunday. Although the day will still be fairly breezy, the showers will be far more scattered and it will be dry and bright much of the time. Highs of 11C to 14C [52F to 57F].”

While the worst will be over by Saturday, Ireland can expect miserable weather conditions to continue into the start of next week.

Rain pushing eastwards.
We've had 10 to 20mm in the west overnight.
Wet & cloudy for most of today, clearance from the west later
11 to 13°C pic.twitter.com/GCCF7mKZhc

Below are a list of all the Met Éireann Storm Brian weather warnings in place over the next few days.

Status yellow rainfall warning for all of Munster as well as counties Munster, Dublin, Carlow, Kildare, Kilkenny, Louth, Wexford, Wicklow and Meath. This remains in place for 24 hours until midnight.

A status yellow weather advisory for Ireland comes into force and will remain in place until midnight on Saturday. South to southeasterly winds on Friday night will veer northwesterly on Saturday and there's a potential for mean wind speeds of 30 to 37 mph [50km/h to 60km/h] and gusts of 56 to 68 mph [90km/h to 110km/h] - especially in coastal counties.

A status yellow wind warning for the entire country comes into force and remains in place for 24 hours until 10pm on Saturday. West to southwest winds in southern parts of the country will reach countrywide with mean speeds up to 40 mph [65km/h] with gusts up to 68 mph [110km/h] at times - potentially higher for a period in coastal parts of the south and west.

A status orange wind warning for counties Wexford, Clare, Cork, Kerry and Waterford begins and stays in place until 12 noon. Winds with gusts of up to 81 mph [130 km/h] are expected as well as a risk of coastal flooding.

If you’re living in Ireland and want to keep track of the progress of Storm Brian, you can follow its path in the video below throughout the weekend:

How are you preparing for Storm Brian? Let us know in the comments section below.