USS The Sullivans “righted and floating,” could be reopen by Memorial Day Weekend

After the USS The Sullivans was raised within three weeks of its partial sinking, The Buffalo and Erie County Naval & Military Park is tentatively eyeing a reopening this month. 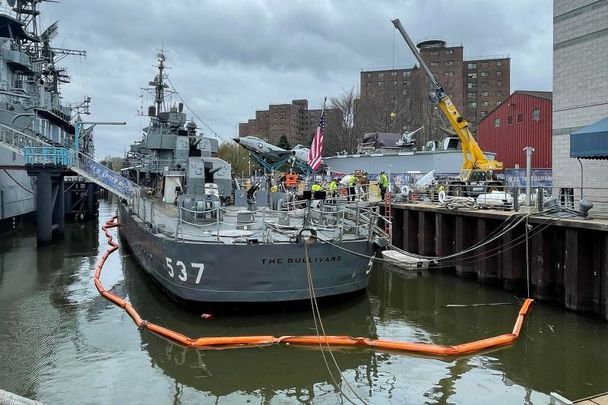 "We are very happy to report today that the effort to save USS The Sullivans is on course, and the ship is righted and floating,” Mayor of Buffalo Byron W. Brown said in a press conference on May 5.

“The emergency response phase is complete, and we have started the maintenance and decontamination phase,” Mayor Brown added.

On April 13, USS The Sullivans, named for the five Irish American brothers who were all killed on the same day while serving aboard the USS Juneau during World War II, suffered a serious hull breach on its starboard side causing it to tilt back and to the right. 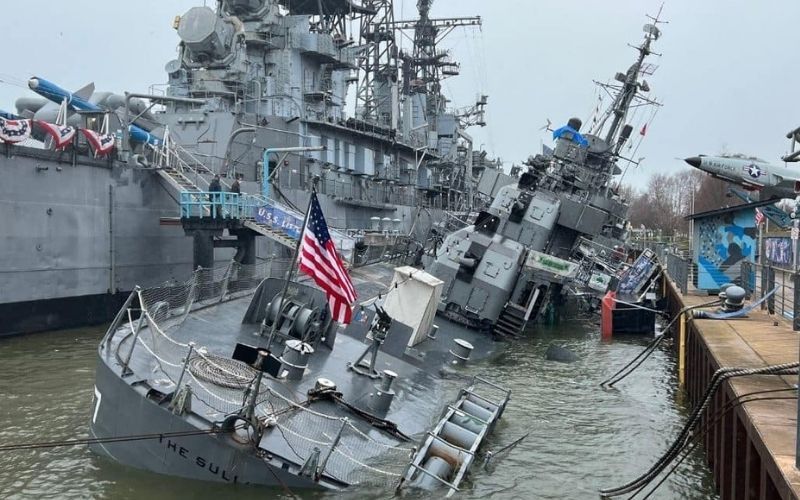 USS The Sullivans shown here on April 14, 2022 at the Buffalo and Erie County Naval and Military Park in New York.

The 78-year-old Fletcher-Class destroyer that saw action in World War II, the Korean War, and the Cold War, was christened by the fallen brothers’ mother Alleta Sullivan, and is a National Historic Landmark. It is now a major attraction at The Buffalo and Erie County Naval & Military Park in upstate New York.

A timelapse of the partial sinking of the USS The Sullivans was shown during Thursday’s press conference:

Posted by Buffalo and Erie County Naval and Military Park on Thursday, May 5, 2022

Captain Lexia Littlejohn of the US Coast Guard said during the presser that the USS The Sullivans has been “substantially righted” and that the list now varies between about .1 and 3 degrees, a “significant difference” from the 20 degrees it saw at its worst.

Dewatering of the vessel was about 95% complete, Captain Littlejohn said, and about 585,000 gallons of water had been removed from the ship. 9,510 gallons of oily-water mix had so far been removed, and a total of 53 holes had been plugged.

However, he added: “When we do open, unfortunately, you will not be allowed inside The Sullivans. You’ll be able to walk on the deck area, but you won’t be able to access the inside area. We have work to do there. Wish I could tell you how long that will take, it’s been estimated anywhere from two weeks to eight weeks, but those are just estimations and I’ll know much better once we get inside to go compartment by compartment and make that evaluation.”

Elsewhere in the conference, Mayor Brown thanked New York Senator Chuck Schumer for his “critically important” support throughout the operation, as well as Congressman Brian Higgins and Governor Kathy Hochul.

In a statement to the Buffalo News on May 8, Marzello offered some transparency on how the incident occurred despite massive fundraising efforts for repairs. (Last November, the "Save the Sullivans" campaign reached $1 million in donations.)

“The incident with the USS The Sullivans, while unfortunate and unexpected, is not unimaginable with an 80-year-old warship that is 50 years past her expected life,” Marzello said. "I understand people want to know how this could happen and may be looking for someone to blame.

“What happened on April 13, 2022, was the result of three factors: age of the ship, years of deferred maintenance, and harsh weather. In the past, proper hull maintenance was deferred for lack of adequate funding.”

Marzello said saving USS The Sullivans has been a top priority since the current board of directors and management were put into place four years ago.

“We raised the funds to commission a full survey of the hull followed by a plan to make necessary repairs. The two-part epoxy approach was selected because it used a process approved by the US Navy and could be completed without moving the ship. The survey revealed a hull so weak and corroded that we weren’t sure she could be towed to a shipyard for dry dock repairs. We weren’t willing to take that chance.”

Marzello said the Park raised $1 million in eight months to execute repairs. Work began in July 2021 and was paused in October when water temperatures were too low for the epoxy to set properly, Marzello said. Work was set to resume this spring with a goal to be complete by the end of this summer.

“This would have protected the hull for many years and provided other options for preservation if warranted,” Marzello said. “Unfortunately, the tragic event of April 13 intervened.”

Marzello said the response since April 13 “has been nothing short of amazing.”

“With a mantra that we would not accept failure as an option, the USS The Sullivans was raised in less than three weeks,” Marzello said. “I am extremely proud to have been a part of that team.

“Although there is still much to do, including decontaminating the ship’s interior and following through on making needed repairs to the hull, we hope to open the Naval Park to the public by this Memorial Day, with restrictions.”

After thanking the community for its passion, commitment, and faith, Marzello added: “The motto of the USS The Sullivans is 'We Stick Together,' based on the passionate spirit of the five Sullivan brothers, and that was never more evident than the 21 days it took to raise the ship named in their honor.

“We will be stronger as an organization as a result of this incident.”