The Irish response to UNICEF's "Get a Vaccine, Give a Vaccine" campaign has seen more than 1 million vaccines donated to the world’s poorest countries 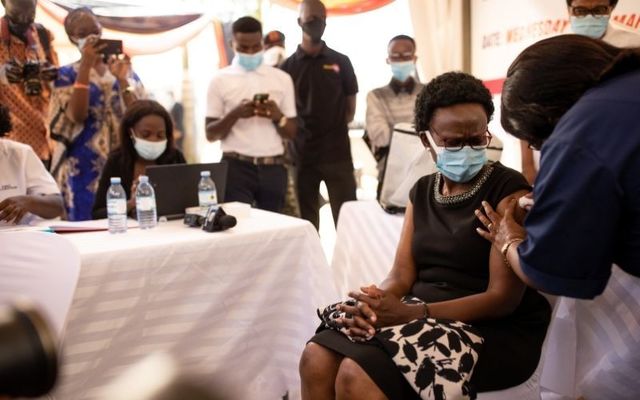 Residents in Kampala, Uganda line up for their COVID-19 vaccine. Getty Images

UNICEF says that it has been "blown away" by the Irish response to its "Get a Vaccine, Give a Vaccine" campaign, which has seen Irish people donate more than one million vaccines to the world's poorest countries.

Launched by Liam Neeson in June, the Irish campaign of the UNICEF effort calls on Irish people to give a vaccine after they get their vaccine from the HSE.

The campaign has raised more than €2.5 million since it was launched two months ago, with UNICEF able to administer two doses of the vaccine for every €4.48 donated.

Peter Power, the Executive Director of UNICEF Ireland, said that the global charity was "simply blown away by the incredible gratitude and solidarity for others that people in Ireland have shown.

"We all know that nobody is safe until everyone is safe, and that no child is safe, until everyone they rely on is safe. That is why UNICEF is putting everything we have got into delivering COVID-19 vaccines to the most vulnerable families, health workers and high-risk people on our planet.

“It is astonishing that some countries in the world have vaccination rates of less than 5%, while the wealthiest countries have vaccinated the vast majority of their populations. By supporting this campaign in huge numbers Irish people have recognised that inequity and have taken this tangible expression of solidarity with people who have no access to vaccines.”

UNICEF Ireland's campaign has been supported by Irish actor Liam Neeson, who has endorsed the campaign in several video and radio advertisements.

The World Health Organization has stated that some low-income countries have only been able to administer 1.5 doses of the vaccine for every 100 people due to lack of supply.

On the other hand, the WHO said that high-income countries had administered 50 doses for every 100 people by May and said that that number has since doubled.

The WHO's COVAX initiative aims to secure enough vaccines to vaccinate the most vulnerable 20% in every country in the world this year and has already secured 175 million doses of the vaccine for 138 countries since March.