WATCH: President Trump declares coronavirus national emergency in the US

President Trump declared a national emergency and outlined the "several decisive new actions" that are being taken to fight coronavirus. 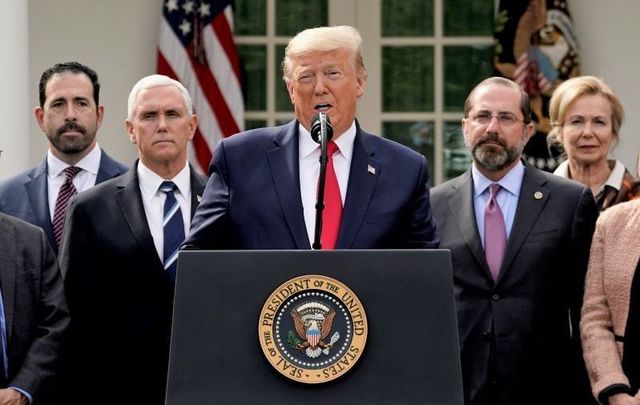 March 13, 2020: President Trump declares a national emergency in the US to better fight the spread of coronavirus. Getty Images

President Trump declared a national emergency in the US on March 13 in order to better tackle the spread of coronavirus, COVID-19.

President Trump announced that he is officially declaring a national emergency across the US in a bid to fight coronavirus during a live address on March 13.

Standing beside Vice President Mike Pence and other officials in the Rose Garden, President Trump discussed the “several decisive new actions we’re taking in our very vigilant effort to combat and ultimately defeat the coronavirus.

"We’ve been working very hard on this, we’ve made tremendous progress.

“When you compare what we’ve done to other areas of the world, it’s pretty incredible. A lot of that had to do with the early designation and the closing of the borders.

“As you know, Europe was just designated as the hotspot right now, and we closed that border a while ago, so there was lucky or through talent or through luck, call it whatever you want.”

(The US has only prohibited travel from the Schengen Area, not all of Europe.)

“Through a very collective action and shared sacrifice, national determination, we will overcome the threat of the virus.”

Trump discussed his travel ban, saying the US is “suspending the entry of foreign nationals who have been to Europe in the last 14 days from entering the United States. Citizens, permanent residents and their families, any of the families returning from Europe will be subject to extra screening as well as self-isolation for a period 14 days.”

(Ireland, not a part of the Schengen Area, is not subject to these restrictions.)

Trump said the WHO confirmed today “many of the things what we said were 100 percent correct, including our designation before them of Europe. Like our earlier, very aggressive actions with China, this measure will save countless lives.”

He continued, “Now we’re in a different phase. We had some very old and obsolete rules that we had to live with. It worked under certain circumstances, but not under mass circumstances. They were there for a long time, they were in place for a long time, and we’re breaking them down now. And they’re very useable for certain instances, but not for this.

“To unleash the full power of the federal government ... I am officially declaring a national emergency. Two very big words.

“The action I am taking will open up access to up to $50 billion of very importantly, very important and a large amount of money for states and territories and localities in our shared fight against this disease.

“In furtherance of the order, I’m urging every state to set up emergency operation centers effective immediately.”

He continued, “I’m also asking every hospital in this country to activate its emergency preparedness plan so that they can meet the needs of Americans everywhere.

“The hospitals are very engaged. New York and various other places are also various engaged,” Trump said, noting that he had recently spoken with Governor Cuomo and had a “very good conversation.”

“We’re working very strongly with many states, including New York,” the President said.

He added that today’s order will confer “broad new authority to the Secretary of Health and Human Services,” who will now be able to “immediately waive revisions of applicable laws and regulations to give doctors, hospital, all hospitals, and healthcare providers maximum flexibility to respond to the virus and care for patients.”

Among the authorities being conferred is the “ability to waive laws to enable telehealth, a fairly new and incredible thing that’s happened in the not-so-distant past, I tell ya what they’ve done with telehealth is incredible. It gives remote doctor’s visits and hospital check-ins.

“The power to waive certain federal license requirements so that doctors from other states can provide services in states with the greatest need.

“Tthe ability to waive requirements that critical access hospitals limit the number of beds to 25 and the length of stay to 96 hours.

“The ability to waive the requirements of a 3-day hospital stay prior to admission to a nursing home, big thing.

“The authority to waive rules that severely restrict where hospitals can care for patients within the hospital itself, ensuring that the emergency capacity can be quickly established.

“We’ll remove or eliminate every obstacle necessary to deliver our people the care that they need and that they’re entitled to. No resource will be spared, nothing whatsoever.”

Regarding the availability of coronavirus tests, Trump said “today we are announcing a new partnership with private sector to vastly increase and accelerate our capacity to test for the coronavirus.

“We want to make sure that those who need a test can get it very safely, quickly, and conveniently. But we don’t want people to take a test if we feel they shouldn’t be doing it. We don’t want everyone running out and taking it; only if you have certain symptoms.”

He said the FDA has approved a new test for the virus. “We expect up to half a million additional tests will be available early next week. We will be announcing locations, probably on Sunday night.”

The FDA is in the process of authorizing Thermo-Fisher’s application, “which will bring additionally 1.4 million tests on board next week, and 5 million within a month, I doubt we’ll need anywhere near that.”

Trump said that discussions are ongoing with pharmacies and retailers to roll out drive-through testing in “critical locations identified by public health professionals” where individuals can drive up and be swabbed without having to leave their car.

“Our overriding goal is to stop the spread of the virus and to help all Americans who have been impacted by this. Again, we don’t want everybody taking this test, it is totally unnecessary.”

The President concluded: “This will pass, this will pass through, we’re gonna be even stronger for it. We’ve learned a lot, a tremendous amount has been learned.”

You can watch the President’s address here: