Does Trump think Ireland is in the United Kingdom?

President Trump appears to have confused Ireland and the UK during a White House press briefing alongside Taoiseach Leo Varadkar on March 12. 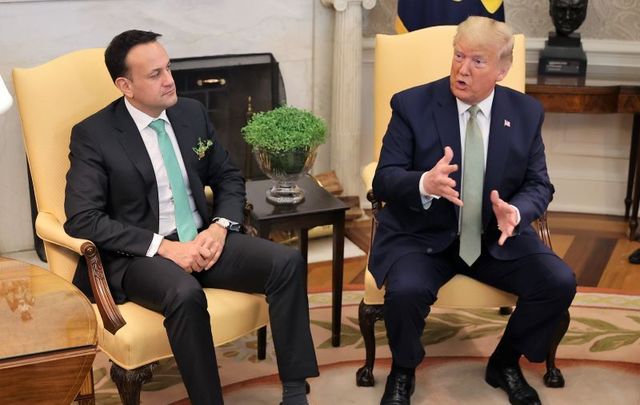 Ireland’s Taoiseach Leo Varadkar was in Washington, DC to meet with President Donald Trump on March 12 for the annual state visit ahead of St. Patrick’s Day.

From Washington, DC, Taoiseach Varadkar announced unprecedented restrictions that were being put in motion in Ireland in hopes of curbing the further spread of coronavirus, which was officially declared a pandemic on March 11.

During a press briefing later in the day featuring both Varadkar and Trump, Varadkar said that the “big concern” at the moment in Ireland is, of course, covid-19.

One of the reporters in the pit then asked President Trump to confirm that Ireland was, indeed, excluded from the travel ban he announced during a live televised address the night before, March 11. (The reporter’s question can be heard at 3:31 in the video below.)

During his live speech on March 11, President Trump said: “To keep new cases from entering our shores, we will be suspending all travel from Europe to the United States for the next 30 days.

“The new rules will go into effect Friday at midnight,” President Trump said, adding “anything coming from Europe to the United States is what we are discussing. These restrictions will also not apply to the United Kingdom.”

At the time of Trump’s speech, the United Kingdom was reporting 460 confirmed cases of coronavirus and eight deaths. He made no mention during his address of Ireland's exemption from the forthcoming ban.

However, after Trump’s address, the US Department of Homeland Security issued a statement on March 11 saying that only nations in Europe’s Schengen Area would be subject to the travel ban, and not all of Europe except the UK.

Both Ireland and the UK are not in the Schengen Area and are therefore not subject to the travel restrictions, according to the DHS.

But the DHS clarification didn't come soon enough to prevent confusion. A video soon circulated online of an employee at New York’s JFK airport discussing Trump’s announcement with passengers who were about to board a flight to Dublin:

From a friend at JFK about to board a flight to Dublin just a few minutes after Trump Europe travel suspension announced.

“If the leader of the free world is telling you that, you know your travel is being affected I would think that we have to give you your money back.” pic.twitter.com/H3FAusQWkG

In response to the reporter’s question at the White House on Thursday, President Trump said: “Well, they know, and I think it was made very clear last night who is and who isn’t [excluded in the travel ban]. And we’ll be discussing that. We’ll be discussing some other moves that we’re going to be making. And I think it’s going to work out very well for everybody.

Taoiseach Varadkar interjected: “Just saying that the President has excluded Ireland from the travel ban. And one of the things that we have in Ireland is CBP, American border security, in Ireland. I went through it myself yesterday, and they were asking the right questions — whether people had been to China, things like that. So that puts us slightly in a different position.”

Trump then goes on to imply that Ireland and the UK are one and the same: “And one of the reasons the UK, basically, has been: It’s got the border; it’s got very strong borders. And they’re doing a very good job. They don’t have very much infection at this point, and hopefully, they’ll keep it that way.”

You can watch the entire video of the press briefing from Taoiseach Varadkar and President Trump here. The reporter’s question comes in at 3:31: