Savannah, Georgia holds the third-biggest St. Patrick's Day celebration in the United States, but the city has canceled its parade for the second year in-a-row due to the COVID-19 pandemic. 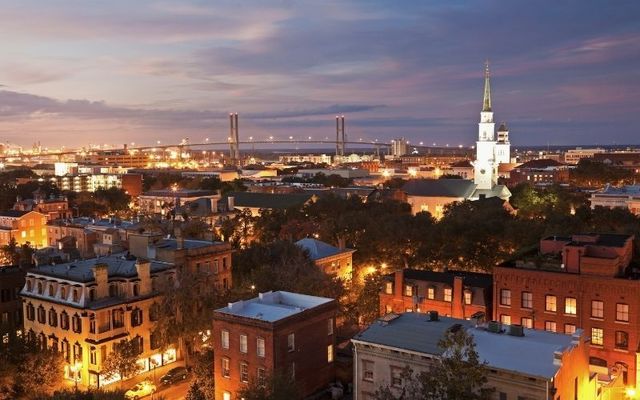 Savannah has canceled its St. Patrick's Day parade and riverfront festival due to the pandemic. Getty

Tens of thousands of out-of-town visitors have descended on Savannah, Georgia ahead of St. Patrick's Day on Wednesday, sparking fears of a COVID-19 super-spreader event.

Savannah, which holds the third-biggest St. Patrick's Day celebration in the United States, has canceled the annual parade for the second year in-a-row due to the coronavirus pandemic, but up to 50,000 people are expected to travel to the city ahead of March 17.

Huge crowds gathered in the city on Saturday night at the Plant Riverside - a $375 million hotel and nightlife development. The development's owners are holding a six-day St. Patrick's Day festival with live music, drawing criticism from Savannah Mayor Van Johnson.

The Plant Riverside District festival started on Friday night and will run until St. Patrick's Day and Johnson said that the festival was a "slap in the face" to Savannah's attempts to curb the spread of COVID-19.

"To advertise this huge festival with the intent of drawing people to a particular space in the middle of a pandemic, when we know social distancing and mask-wearing is not going to be enforced, is horrible as far as I'm concerned," Mayor Johnson said.

In January, Mayor Johnson announced that the moratorium on public events in Savannah was being extended through the end of March, thus canceling the St. Patrick's Day Parade. John Fogarty, General Chairman of the Savannah St. Patrick’s Day Parade Committee, said his organization respected the City's decision.

However, the widespread cancelations have not stopped locals and out-of-towners alike from celebrating Ireland's national holiday and the city's historic district could be 90 percent full this weekend - the busiest it's been in the past 12 months, according to the President of the city's tourism bureau.

Joe Marinelli, the President of Visit Savannah, told the Daily Mail that COVID fatigue was driving up visitor numbers this year.

"People know that Savannah is a St. Patrick's Day destination, they know the holiday is in the middle of the week and they´re going to come the weekend before and after," he said.

Mayor Van Johnson said that Savannah's police force will be enforcing mask-wearing among St. Patrick's Day crowds and said that were will be $500 fines for people who don't comply.

He said that he may use the city's police to block routes to the Plant Riverside District Festival if crowds pose a public health risk.

The Plant Riverside District doesn't need a permit to hold its six-day festival because the complex sits on four acres of private property.

Meanwhile, Georgia Governor Brian Kemp has introduced an emergency order that prohibits gatherings of more than 50 people unless social distancing is observed.