St. Patrick's Day parades that are defying the pandemic

Irish communities in US towns and cities have put a new spin on St. Patrick's Day this year in light of public health restrictions. 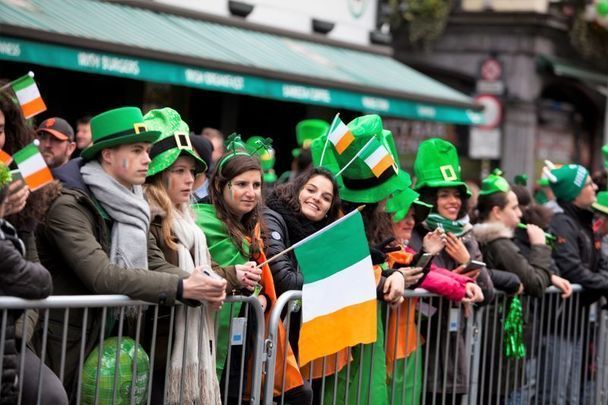 The St. Patrick's Day parade in Dublin prior to the pandemic. Rolling News

Irish communities in US towns and cities are preparing to put a new spin on St. Patrick's Day celebrations after annual parades were canceled for the second year running.

St. Patrick's Day parades were canceled all over the United States this year due to the COVID-19 pandemic, while the renowned New York City St. Patrick's Day Parade was reduced to a largely symbolic affair.

However, Irish communities are determined to avoid missing out on St. Patrick's Day for a second-year in-a-row and many have put a new spin on the traditional parade.

For instance, the St. Patrick's Day parade in St. James, Long Island, is now going to be held in cars, while residents in Hilton Head, South Carolina, are holding a St. Patrick's Day Boat Parade on Sunday in place of a traditional parade.

Elsewhere, parade organizers in Dublin, California, have organized a drive-in Celtic rock concert, while a virtual 5k run has been planned in Naperville, Illinois.

However, the small town of Erin, Wisconsin, plans to hold a parade this year after it was forced to cancel its 40th St. Patrick's Day parade and officials are determined to try and hold one this year.

Dennis Kenealy, a retired lawyer who is chairman of the town board, told the New York Times that the parade will take place on a stretch of highway and said that spectators will be able to watch from their cars.

Kenealy said that the parade would be canceled if organizers can't implement all public health protocols.

Public health officials in the United States have advised against large-scale celebrations on March 17 even though some cities and states have been loosening COVID-19 restrictions.

Dr. Allison Arwady, the commissioner of the Chicago Department of Public Health, recently told reporters that the US is "not at a point where we can start having major St. Patrick’s Day celebrations".

Health officials have pleaded with people to stay at home if possible and to act responsibly if they decide to go out on March 17, pointing to large-scale gatherings in bars and restaurants ahead of St. Patrick's Day last year that were viewed as super-spreaders.