Theodore McCarrick, who was defrocked earlier this year, is facing more allegations of sexual abuse against minors. 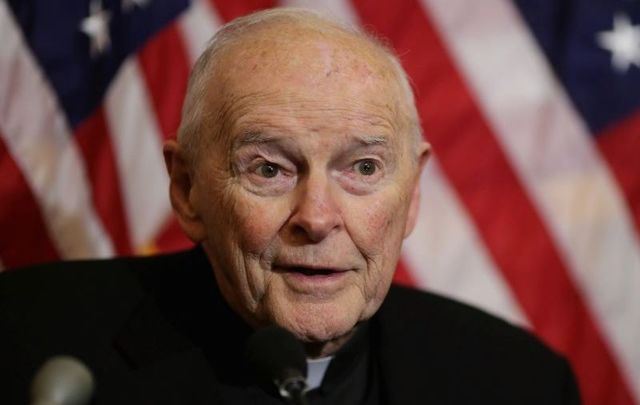 Theodore McCarrick, who became the first bishop to ever be defrocked, is accused of abusing at least seven more boys.

Former Cardinal Theodore McCarrick is facing new accusations that he abused at least seven boys from about 1970 until 1990, as well as six more allegations of sexual abuse by seminarians and former seminarians.

Read More: Who is Bishop McCarrick and what are his crimes?

The Washington Post now reports new allegations were confirmed by three sources, including one that has “direct knowledge of the claims U.S. church officials sent to the Vatican in January.”

McCarrick became the first-ever bishop to be defrocked in the history of the Catholic Church earlier this year amid allegations that he sexually abused two minors and sexually harassed seminarians.

The Washington Post reports that due to the statute of limitations in the US, where the abuse is understood to have occurred, 89-year-old McCarrick is unlikely to face criminal prosecution.

The source with “direct knowledge” also told The Washington Post that a complaint of youth abuse against McCarrick was reported to police in Ireland.

The publication spoke with one of the accusers, who said that many of the boys abused by McCarrick would have known each other and traveled with the disgraced bishop on fundraising trips. While this group of abused men confided in each other in “the barest terms,” they only decided to contact authorities after allegations from two other men against McCarrick were made public in 2018.

The accuser who spoke with The Washington Post indicated that he “wanted to move on” after cooperating with civil investigators and Church officials earlier this year, but was driven to speak out in the wake of an interview McCarrick had with Slate magazine that was published in September.

In the Slate interview, McCarrick said he is “not as bad as they paint me. I do not believe that I did the things that they accused me of.”

The accuser told The Washington Post: “He [McCarrick] attempted to discredit the victims of his sexual abuse while creating further division and confusion within our church.”

The man who spoke with The Washington Post has penned a letter under the pseudonym ‘Nathan’ that was shared online by his lawyer Kevin Mulhearn, who represents a group of men accusing McCarrick of abuse.

In his letter, Nathan clarifies: “I don’t know any of the victims of McCarrick who have been publicly identified thus far. I don’t know anything about the seminarians. I have no clue about anything that goes on in Rome. I was, however, a witness in the US based investigations of McCarrick’s sexual abuse of minors and I have some thoughts to offer based on my experience over the past year.”

Nathan goes on to accuse McCarrick of sexually abusing boys between the ages of 12 and 16, long before he was put in charge of seminaries.

“By the time then-Cardinal McCarrick stepped in front of the cameras and microphones in 2002 as the face of the U.S. Catholic Church’s response to the sexual abuse crisis, he had already completed a personal campaign of predatory sexual abuse of minors and young adult males that stretched back across four decades,” writes Nathan.

Nathan goes on to praise the two men who finally spoke out about McCarrick’s decades of abuse in the summer of 2018. He also adds that he blames nobody but McCarrick for the ordeal.