As the bodies of the UK lorry tragedy's victims begin to be repatriated to Vietnam, more suspects from Northern Ireland are facing charges in relation to their deaths. 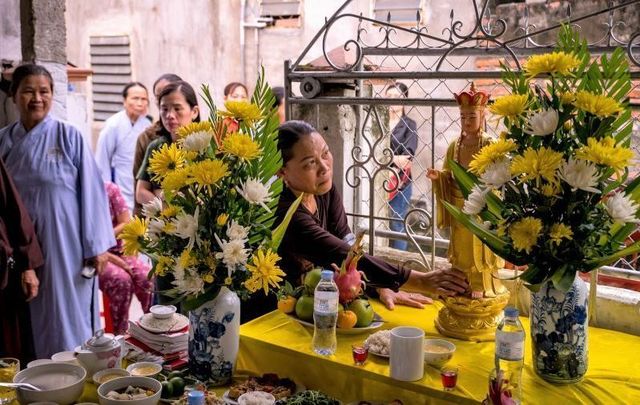 Family members and neighbors of Pham Thi Tra My, who has since been identified as one of the victims, attend a praying ceremony with Buddhist monks in front of a makeshift shrine her house on October 28, 2019 in Ha Tinh province, Vietnam. Getty Images

The bodies of 39 Vietnamese migrants were discovered in the back of a lorry in the UK on October 23.

As dozens of families in Vietnam prepare for the return of their relatives' bodies in the wake of the UK lorry tragedy last month, more men from Northern Ireland have been charged in relation to their deaths.

On October 23, 39 bodies were discovered in the back of a lorry that had arrived into Grays in Essex outside of London. The victims, all Vietnamese, have since been formally identified and are understood to have been part of a human trafficking scheme in order to enter Great Britain. A number of men from Northern Ireland have since been arrested in relation to the deaths.

On November 24, Essex Police said that 23-year-old Christopher Kennedy from Co Armagh in Northern Ireland, who was arrested in Buckinghamshire on November 22, was charged with conspiracy to arrange or facilitate the travel of people with a view to exploitation and conspiracy to facilitate the commission of a breach of UK immigration law.

Kennedy appeared in front of magistrates in Chelmsford on November 25 but did not enter a plea. Kennedy’s case is adjourned to the Old Bailey in London on December 13.

He did not enter a plea for the outstanding offenses charged to him which include the 39 counts of manslaughter as well as transferring criminal property and conspiracy to commit a human trafficking offense.

Robinson, who was driving the lorry when the victims’ bodies were discovered, was one of the first people arrested and charged in the tragedy that unfolded on October 23.

Later on November 25, Essex Police announced that another man, a 36-year-old from Purfleet, was arrested in east London on suspicion of manslaughter, conspiracy to traffic people and conspiracy to assist unlawful immigration. He remains in custody for questioning.

Earlier, on November 1, a European Arrest Warrant was executed in Dublin for 22-year-old Eamonn Harrison of Mayobridge in Northern Ireland. He is charged with 39 offenses of manslaughter, as well as human trafficking and immigration offenses. He was remanded into custody after appearing at the High Court, Criminal Courts of Justice in Dublin that day and is now fighting extradition charges to bring him to the UK.

Essex Police are understood to still be searching for brothers Christopher and Ronan Hughes, both from Co Armagh,  for questioning in relation to the deaths.

Read More: Irishman released without charge after 15 people found in lorry in England

Repatriation of the victims’ bodies

The Associated Press reports on Wednesday that families in Vietnam are preparing for the repatriation of the victims' bodies.

Hoang Lanh, the father of 18-year-old victim Hoàng Van Tiep, said on Tuesday that he had been informed by a local government official that his son’s remains would be brought home Wednesday, along with those of six other victims from Dien Chau district in Nghe An province, including Tiep's cousin Nguyen Van Hung.

"It's bittersweet," Lanh said. "I can't believe I would have to welcome my son back. I'm devastated but I am happy to have him back with us soon."

Hoàng Thi Nhiem, Tiep’s sister, said her family had received her brother’s body shortly before noon. “We are very sad, but we are happy now that he has been brought back to the place where he was born to be with his family and surrounded with love from the family. He wouldn’t be able to rest in peace if he had still been in England.”

Nguyen Thanh Le, the father of 33-year-old victim Nguyen Van Hung, said: "I have been sad for a month and I can't eat anything. My son died far away from his home and I had to wait for a long time, but today his body is coming back and tomorrow is the funeral.”

Gareth Ward, the British ambassador to Vietnam, said in a video statement on Wednesday that the two countries will work together “to prevent human trafficking and protect vulnerable people here.

“We will continue working with Vietnamese authorities to investigate the criminal acts that led to this tragedy.

"In the coming time, I plan to visit the affected communities to express my condolences and reinforce the British government’s commitment to preventing anything like this from happening again.”