Both Simon Coveney and Theresa May have come out strongly against the progression of the UK government's Northern Ireland Protocol Bill. 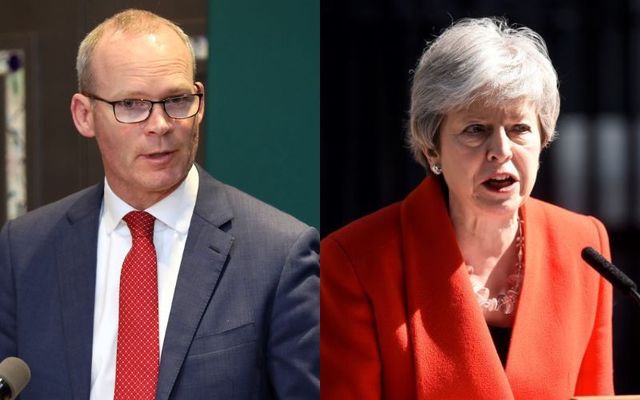 Simon Coveney, Ireland's Minsiter for Foreign Affairs, and Theresa May, the former British Tory Prime Minister, were in agreement in the latest Westminster vote on the Northern Irish Protocol Bill.

Both agreed that the British government was breaching international law despite Westminster pushing Prime Minister Boris Johnson’s government’s stance on the issue towards the second phase of its Commons passage.

Coveney said in advance of the vote, “I am hugely disappointed that the British government is continuing to pursue its unlawful unilateral approach on the Protocol on Northern Ireland.”

It will damage the GFA, not protect it.
It’s a breach of Int. Law & will damage the UKs reputation.
It’s against business & majority opinion in NI.
It’s unnecessary UK unilateral action when partnership & compromise is on offer from #EU.

This Bill is no fix.

May, who was ousted in a Tory party coup that made Johnson British Prime Minister three years ago, was even more damning in her criticism.

“This bill is not, in my view, legal in international law, it will not achieve its aims and it will diminish the standing of the United Kingdom in the eyes of the world, and I cannot support it,” she said.

Johnson has a majority to push the law through the Commons in further debates next month, but a vocal group of Tory rebels will add to concerns about his authority following his survival in a confidence vote on June 6 when 41 percent of his own party voted against him, and the embarrassing loss of two parliamentary seats in by-elections last week.

The bill will face a bigger challenge when it eventually moves to the upper house, the unelected House of Lords, where the government doesn’t have a majority and many peers have expressed concern about it. The Lords can amend the legislation and delay it for up to a year.

Before then, according to many political predictions, Johnson will have lost his teetering hold on power and the Tories will have a new leader.

The SDLP’s Clare Hanna argued during Monday’s debate at Westminster that most people in Northern Ireland voted to remain in the European Union and the Protocol, which the British government now wishes to overwrite, was intended to ensure a safe trading border in Ireland. Now the move to abandon it was designed specifically to protect the position of a failing prime minister.

Spoke yesterday on the campaign of distortion being waged about the causes & effects of the Protocol, by those who created it, and urged DUP to unshackle themselves from the ERG & help us achieve the negotiated solutions that can work for all our people. They heckled instead 🤷‍♀️ pic.twitter.com/hWGeSs7q2g

Introducing the debate on the legislation, which would allow British ministers to unilaterally scrap most of the Protocol, Foreign Secretary Liz Truss said that in the absence of a negotiated solution there was no other choice.

Once the legislation was through, there would be a solution that helps restore the balance between the communities in Northern Ireland and helps uphold the purpose of the Good Friday Agreement.

💬 Live: My speech to @HouseofCommons on the Second Reading of the Northern Ireland Protocol Bill https://t.co/P56MMYXQeA

Democratic Unionist Party leader Jeffrey Donaldson suggested that his party, which has refused to cooperate with Sinn Féin in Stormont, could go back into government in Northern Ireland if the bill passes all its stages in the House of Commons.

On the day when the Protocol Bill has its second reading in the House of Commons, @duponline has distributed this report to MP’s on the harm the protocol is doing to businesses and consumers, to political stability in Northern Ireland and to the Union. https://t.co/ADEfExtwSH

The effrontery of the lying Brits is hard to watch