Princess Kate tried to laugh off a considerably tense moment in Belfast when a woman told her "Ireland belongs to the Irish." 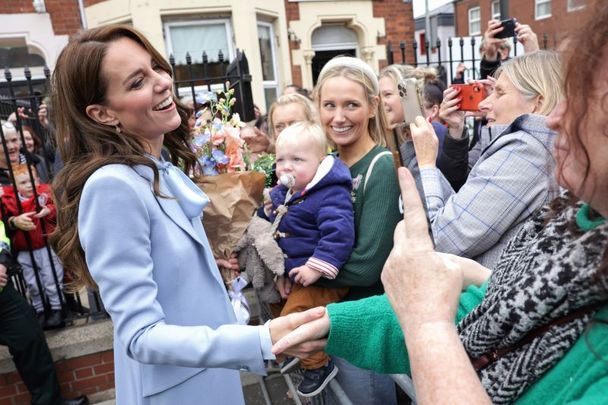 October 6, 2022: Catherine, Princess of Wales, smiles and shakes hands with well-wishers after her visit to the PIPS (Public Initiative for Prevention of Suicide and Self Harm) charity with Prince William, Prince of Wales in Belfast, Northern Ireland. Getty Images

Kate and William's one-day visit to Northern Ireland on October 6 had one considerably tense moment.

“Nice to meet you," a woman told Kate as the Princess of Wales shook hands with people in a crowd in Belfast, "but it would be better if it was when you were in your own country.”

Kate attempted to laugh off the comment and moved along to another person in the crowd.

"Ireland belongs to the Irish," the woman added.

When meeting members of the public on her visit to Northern Ireland, the Princess of Wales was challenged by a woman who suggested Kate was not in her own country pic.twitter.com/XtaIXFrn96

Kate and William were on a one-day visit to Northern Ireland today, October 6. It was the couple's first visit to the region since 2021.

Elsewhere on their visit, William and Kate visited PIPS, a suicide prevention charity, in North Belfast. There, the royal couple was welcomed there by the Lord Mayor of Belfast Tina Black and Sinn Féin MP for the constituency John Finucane.

At PIPS, William and Kate took part in an art therapy session, which involved painting pumpkins, alongside vulnerable children who have been supported by the charity organization.

The couple also helped pack the charity's Little Boxes of Hope, which are support packages given to children following their time with PIPS to assist their ongoing recovery and ensure that their parents and guardians feel better equipped to cope.

It was an absolute pleasure and honour to have HRH Prince & Princess of Wales visit our Belfast offices to learn more about our essential life-saving services!

We had a fantastic conversation surrounding mental health & how we support those and their family affected by suicide. pic.twitter.com/3VWRedgY1C

Afterward, the Prince and Princess participated in a cocktail-making race at Trademarket in Belfast's City Centre.

Who did it better? pic.twitter.com/t24ifPmrI9

— The Prince and Princess of Wales (@KensingtonRoyal) October 6, 2022

Later, in Carrickfergus, Kate and William learned about the work of Carrick Connect, which offers support services to local young people experiencing social or emotional difficulties.

The volunteers and team behind Carrick Connect certainly give their ‘Feel Good Hub’ its name – supporting children and young people in the community with social or emotional difficulties.

Keep up the amazing work! pic.twitter.com/fdn6NfKDE4

— The Prince and Princess of Wales (@KensingtonRoyal) October 6, 2022