Chris Heaton-Harris has been reappointed as Northern Ireland's Secretary of State as the October 28 deadline to form an Executive or face an election looms. 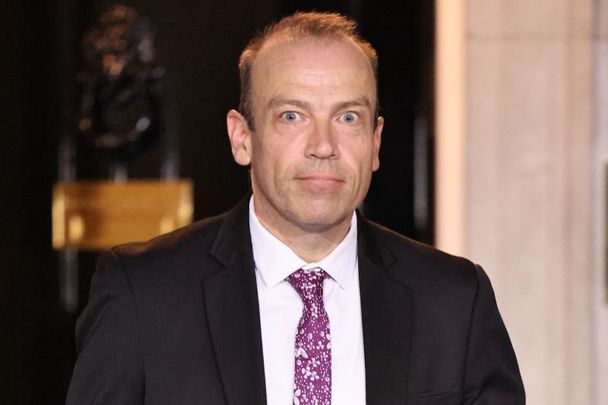 Chris Heaton-Harris has been reappointed as the Secretary of State for Northern Ireland amid new UK Prime Minister Rishi Suank's Cabinet "reshuffle."

Heaton-Harris became Northern Ireland's third Secretary of State within three months in September when he was appointed to the post by UK Prime Minister Liz Truss.

The Rt Hon Chris Heaton-Harris MP @chhcalling has been re-appointed as Secretary of State for Northern Ireland @NIOgov. #Reshuffle pic.twitter.com/STxozLpQ4W

Heaton-Harris will remain in the role as Secretary of State for Northern Ireland as the region approaches its October 28 deadline to form its Executive or face another election.

There has been no functioning Executive in Northern Ireland since the May elections where Sinn Féin emerged as the largest party for the first time ever. The Democratic Unionist Party (DUP), which became the second-largest party in the most recent elections, has been refusing to go into power-sharing as a matter of protest against Brexit's Northern Ireland Protocol.

Heaton-Harris has vowed to call an election if an Executive is not formed in Northern Ireland by Friday, October 28.

The legislation is clear - if the Executive does not reform by 28 October, I will call an election. pic.twitter.com/d4vXA03EdA

Sinn Féin's Michelle O'Neill, who is Northern Ireland's First Minister-designate, said she would be meeting with Heaton-Harris in Belfast on Wednesday.

Restoration of the Executive is the number one priority to help workers and families.

I will be meeting the reappointed SoS @chhcalling in Belfast tomorrow.

Before Heaton-Harris' reappointment was confirmed on Tuesday, Speaker Alex Maskey announced that the Northern Ireland Assembly would be recalled at noon on Thursday, October 27.

He wrote: "The purpose for which the Assembly has been summoned is to elect a Speaker and Deputy Speakers, to appoint a First Minister and deputy First Minister and all other Executive Ministers and to debate the following motion:

"That this Assembly expresses deep concern at the deepening cost of living crisis; is further concerned that the ongoing instability at Westminster has compounded these financial pressures; and supports the urgent convening of an Executive to support our public services and provide urgent help for those struggling with the cost of living crisis."

The Assembly has been recalled for a sitting on Thursday 27 October at 12pm to:
- elect a Speaker & Deputy Speakers,
- appoint a First Minister & deputy First Minister & all other Executive Ministers, &
- debate a motion on the 'Cost of Living Crisis'.https://t.co/neYvvOtXht pic.twitter.com/sKjBFIkv1o

Heaton-Harris, a self-described "fierce Eurosceptic," became the UK Conservative Party’s Chief Whip of the House of Commons in February. Previously, from July 2018 through April 2019, he served as a Parliamentary Under Secretary of State at the Department for Exiting the European Union.

In January, while serving as Minister of State at the Foreign, Commonwealth & Development Office, Heaton-Harris visited Northern Ireland. He said there: "It is clear from what I heard today and previously that the Protocol isn't working and we need to find a solution."