Michelle O'Neill added that her school caused a "huge fuss" when she returned to do her A-levels after giving birth to her daughter. 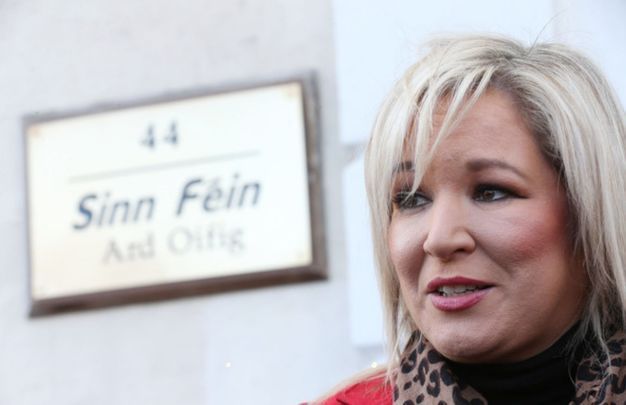 Sinn Féin Vice President Michelle O'Neill has revealed that she was prayed over after she became pregnant while she was still at school.

O'Neill added that her school caused a "huge fuss" when she returned to do her A-levels after giving birth to her daughter.

O'Neill became pregnant at the age of 16 while studying for her GCSEs at St. Patrick's Girls' Academy in Dungannon, County Tyrone, and told the BBC's Mark Carruthers that her form teacher at the time of her pregnancy was "absolutely amazing" and "very understanding".

You're trying to do your GCSEs maybe having been up all night the night before with a child with a sore ear," she told Carruthers.

"Unfortunately my reality was that not everybody in the school was as supportive."

Speaking in the first of a series of special Red Lines programs, O'Neill said it was "frowned upon" for a 16-year-old girl to become pregnant at the time.

"A 16-year-old girl being pregnant was frowned upon and they wouldn't have been the kindest in terms of their approach to supporting me at that time."

She added that some people in her school made her feel as though she had sinned.

"It was nearly like, you know, that I had sinned and therefore I must be prayed upon which obviously was not the right approach."

O'Neill said she returned to the school to sit her GCSEs six days after giving birth to her daughter so that she could go on and complete her A-levels.

However, she said the school created a "huge fuss" when she attempted to return for her A-levels, stating that she hadn't asked for permission to come back.

"I remember turning up for sixth form having achieved my GCSEs and the required amount to go back in to do A-levels and I remember the school creating a huge fuss that I hadn't asked for permission to come back to the school."

She said the school caused a fuss during an assembly, describing it as an embarrassing experience.

She said she has never been invited back to St. Patrick's Academy to speak to students but said she would "of course" return to the school if she was invited.

"I have my own lived experience, but the young people that are at the school are entitled to have access to their politicians and have people come in and talk to them," she said.

The board of governors at St. Patrick's Academy said in a statement that they were sorry to hear of O'Neill's experiences but heartened by the actions of her form teacher.

"The approach taken to young people in this situation is now very much one of compassion and pastoral support, underpinned by the RSE and pastoral care policies," the board of governors said.

"Michelle has shown great tenacity and fortitude both then and in the intervening years, and she is certainly a role model to young women today."