Adorable seal released back into the wild after amazing Irish rescue

The orphaned grey seal pup was discovered at Binnion Beach on the northwestern coast of Ireland in January. 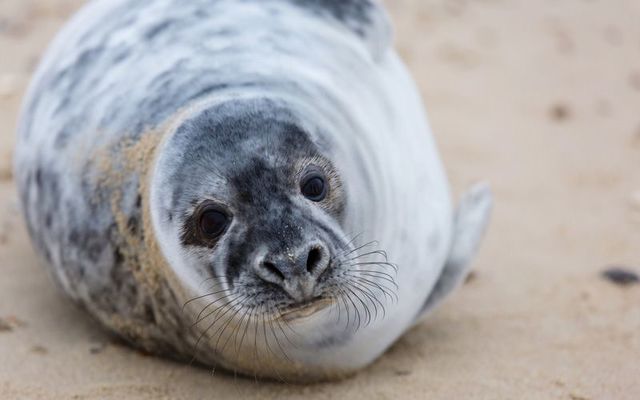 An emaciated grey seal pup found on an Irish beach earlier this year has made a full recovery and has been released back into the sea.

The orphaned pup was discovered at Binnion Beach on the northwestern coast of Ireland in January, and Seal Rescue Ireland was called in to help.

Carers at the animal rescue charity named the seal Atria, after Alpha Trianguli Australis, the brightest star in the southern constellation of Triangulum Australe.

When she was found, Atria was around a month old and weighed 88lbs less than she should have. The poor pup, who still had the baby fur known as lanugo on her flippers, had been abandoned by her mother and was not eating.

Carers at Seal Rescue Ireland first rehydrated Atra with an electrolyte solution before moving her to a fish soup. She was also given decongestants for a cough and deworming drugs to treat any parasites.

By mid-February, Atria was able to eat whole pieces of fish, reported Newsweek.

In mid-March, she hit 50Ibs and progressed to using a pool where she could get used to being in a larger space, interact with other seals, and learn how to fish.

After being in the animal charity’s care for four months, Atria was released back into the wild at Kiltennel Beach, approximately three miles from where she was found. Atria was released with Ptolemy, another seal pup that had been in the care of the charity since February.

The charity said in a press release: "Atria has come along way from the tiny, lanugo sock wearing, underweight pup that came into our care back in January.

"Atria has shed her lanugo mittens and blossomed into a healthy thriving grey seal pup ready to continue her adventures back home in the wild."

It went on: "We are amazed with how she has progressed during her time with us here at the centre and we are sure that she will continue to thrive out in the wild."