Sammy the Seal crosses the street three times a day for fish from the local fish shop. 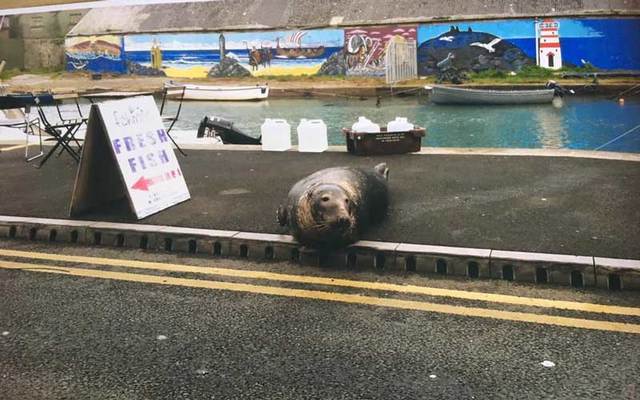 Sammy the Seal. Facebook/Sammy The Seal

The antics of Sammy the Seal in Wicklow, Ireland, keep going viral, as unsuspecting visitors to the town keep happening upon the animal’s frequent visits to the local fish shop.

Three times a day, Sammy crosses the road from the sea to visit the Lighthouse Seafood Restaurant on the Wicklow seafront, for fresh fish. The sea mammal has been a regular visitor to the fishmonger across the street since 2012.

Read More: Meet Sammy, the Wicklow seal who begs for fish and is friends with locals

Since then, Sammy has become the town’s mascot, and you can now purchase “I Saw Sammy the Seal” t-shirts to show you have seen him in action. The seal has grown so popular that he even has his own Facebook page.

Even though Sammy has been around for several years, every chance encounter with him can spark a renewed media frenzy, The Guardian reports.

Sammy went viral again this week, when a photo captioned “Just witnessed this giant seal being chased out the door of a fishmongers shop in Wicklow town” by Dublin-based DJ Derek Byrne spread like wildfire online.

Just witnessed this giant seal being chased out the door of a fishmongers shop in Wicklow town. pic.twitter.com/WGlGxlAWfs

Sammy previously went viral last year when a video was posted showing a member of staff, with a plastic chair, trying to get him to cross the road back into the sea, pleading, “Move on, come on please, back in the water. Sammy go home.”

However, Alan Hegarty, from the Lighthouse Restaurant and the Fishman shop the seal frequents, wants to stress to visitors that Sammy is not tame. In an interview, he told the Visit Wicklow organization: “People have the tendency to think he might be tamed, but he is not tamed. At the end of the day he is a wild animal and we want him to remain that way.”

Since posting his tweet of the seal last week, Byrne has received more than 1,000 replies. “I’m not a huge fan of puns and if one more person tells me his bloody name is Sammy! I went to sleep last night cursing that seal.”

He added: “My father-in-law has enough joke material to get him through Christmas.”