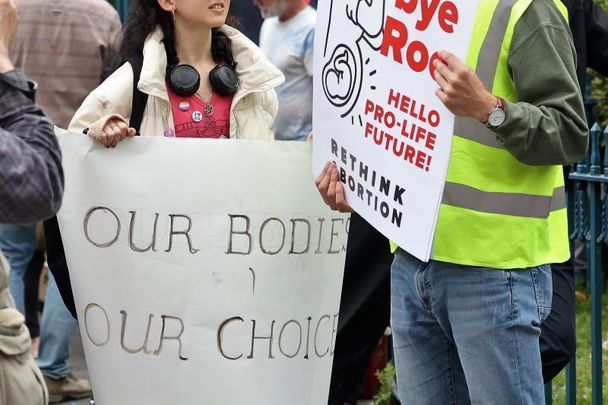 July 2, 2022: Different points of view at a Pro-Life demonstration in Dublin. RollingNews.ie

Ireland’s Minister for Health Stephen Donnelly has secured Cabinet approval to legislate for the designation of "safe access zones" around healthcare premises to safeguard access to termination of pregnancy services.

A formal Bill will now be drafted by the Office of the Attorney General in consultation with the Department of Health.

"Nobody should be harassed, insulted, intimidated, or interfered with in any way, or have their decision to access lawfully available healthcare services subject to attempted unsolicited influence by strangers," Donnelly said in a statement on Wednesday, July 27.

"The heads of bill [general scheme of the bill] designate specified healthcare premises and 100 metres surrounding their perimeter as safe access zones."

The Department of Health noted that the legislation will provide for safe access zones at sites that can provide legal termination of pregnancy services, not just those that do.

"The introduction of safe access zones will protect the freedom to access termination of services without impediment and the privacy and dignity of women accessing health services, as well as the service providers, and their staff in the course of their duties and responsibilities," Donnelly said.

He added: "I am committed to seeing the Bill drafted as quickly as possible so it can be introduced to the Oireachtas, and I would appreciate support for that Bill when it is introduced."

Punishment for convicted offenders will range from fines to imprisonment, the Department of Health said, which noted that the legislation will also include some exceptions, including otherwise lawful activity within 100 meters of the Houses of the Oireachtas.

Everyone has a right to be treated with dignity and respect when accessing, or providing, medical care. Gov has just approved Heads of Bill detailing how we plan to legislate for the designation of Safe Access Zones that will safeguard access to termination of pregnancy services. pic.twitter.com/qRJFVD3DsA

In a piece for The Journal on Wednesday, Donnelly wrote: "Unfortunately, we are aware of demonstrations that have taken place outside hospitals and GP practices providing termination services.

"These demonstrations can cause anxiety and distress to those accessing and providing services. They seek to intimidate and deter women from accessing these services – and our healthcare workers from providing them."

The establishment of exclusion zones around medical facilities was named as a priority in the most recent Programme for Government, which was published in October 2020. They were also a recommended in a September 2021 report from the Abortion Rights Campaign.

The real experience of someone who faced intimidating behaviour while accessing abortion in Ireland, due to the lack of Safe Access Zone legislation. #RepealReview #SafeAccessZones pic.twitter.com/2odbYUO6jz

Abortion has only been legal in Ireland since January 2019, after the country voted in May 2018 to repeal the Eight Amendment. The Health (Regulation of Termination of Pregnancy) Act 2018, which went into effect in January 2019, permits termination to be carried out in cases where there is a risk to the life, or of serious harm to the health, of the pregnant woman, including in an emergency; where there is a condition present which is likely to lead to the death of the foetus either before or within 28 days of birth; and without restriction up to 12 weeks of pregnancy.

Earlier this month, the Department of Health said that 4,577 terminations of pregnancies were officially notified in Ireland from January 1, 2021, until December 31, 2021. However, the Department noted that the figure was likely low and that approximately 6,700 second consultation claims were made in that period.

RTÉ reported this week that the latest figures show that 11 of 19 maternity hospitals in Ireland offer abortion services, as do one in 10 general practitioners (GPs).