The Russians have once again sought help from the Irish government to stop protests outside the gates of the Russian Embassy in Dublin. 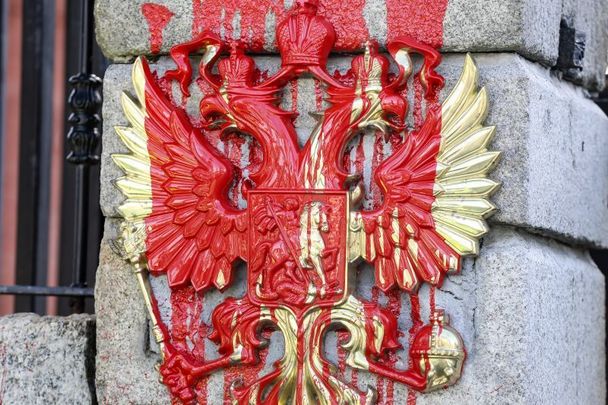 February 24, 2022: Red paint on the coat of arms of the Russian Federation on the gate outside of the Russian Embassy in Dublin, Ireland. RollingNews.ie

As President Vladimir Putin’s troops continue their murderous campaign in Ukraine, including the death of three-month-old Kira Glodan, who was only four weeks old when war broke out, the Russians have complained of protestors being “disrespectful of human dignity” outside the embassy gate in Orwell Road, Dublin.

They have also complained of people using “obscene language” and “harassing officials.”

The Irish Mirror reported exclusively on details of what it described as a "brazen letter" sent to Ireland's Minister for Foreign Affairs Simon Coveney’s department on April 14.

That was many weeks after the Russians thanked the Irish authorities for their protection assistance when a truck from a clerical goods production company reversed through the embassy gate early in March.

The April 14 letter about continuing protests read: “The participants of manifestations and gatherings, taking place on a daily basis at the gate of the embassy, go far beyond the acceptable behavior characteristic of a peaceful protest.

“In particular, they shout insulting messages, containing elements of harassment and abuse, disrespectful of human dignity, which are directed at the Embassy staff.

“During the passage of the vehicles, including those carrying minor family members of the embassy staff, the protesters deliberately approach cars, knocking on windows, with aggressive gestures and using an obscene language.

“Therefore the embassy requests the department’s assistance in arranging appropriate measures by An Garda Siochana in order to prevent these unacceptable actions.”

One of the protestors has been Labour Party leader Ivana Bacik. She told the Mirror: “I have been proud to stand outside of the embassy on lots of occasions now with the regular protesters and I want to pay tribute to the many local residents who come every day and stand against the atrocities being committed by Russia.”

Although four Russian diplomats have been expelled from the embassy, Russian Ambassador Yury Filatov remains at his post despite demands from the opposition and some government TDs that he be also kicked out.

Bacik this week repeated the demand. She said: “I’ve called for his expulsion and I’m renewing that call on Minister Coveney because I think that each day the news brings more atrocities. We need to see more action being taken at this point.”

Bacik also said she has not witnessed any abusive behavior during her time protesting outside the gates at the embassy.

Meanwhile, Minister for Public Expenditure Michael McGrath told Cabinet colleagues on Tuesday of this week that the projected cost of helping Ukrainians next year is €3 billion, up from a €2.5 billion estimate in March.

Taoiseach Micheál Martin has rejected the idea of putting a cap on the number of Ukrainian refugees in Ireland after more than 25,000 arrived in just over two months.

He said accepting Ukrainians would undoubtedly pose a challenge and noted that 100,000 refugees and asylum seekers had come to Ireland since 1999.

He said during a visit to Green Glens complex in Millstreet, Co Cork, where he met dozens of Ukrainian refugees: “We have to do everything we can to protect women and children and the vulnerable in the first instance and that’s what we are going to do along with our European colleagues.”

Martin said the conflict was unprecedented in terms of the manner in which the Russian military was “targeting civilian residential zones…leveling of towns and creating terror.”

A privilege to meet families today who have fled trauma and war in #Ukraine.

Very moved by their stories, and by their overwhelming gratitude for the kindness shown by the Irish people.

They told me how much it means to have peace, security and safety for their children. pic.twitter.com/5SIkQ7IeKX