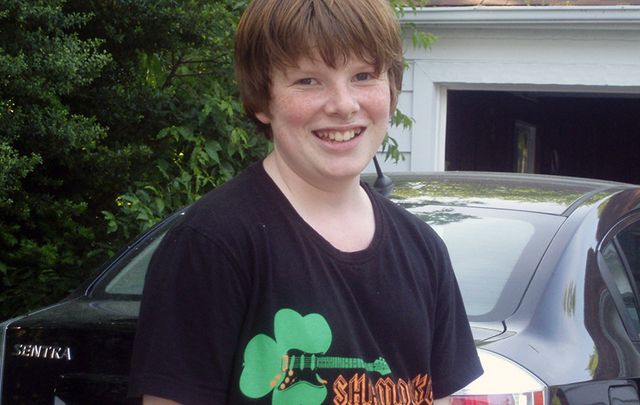 Rory Staunton lost his life to sepsis, at the age of 12, five years ago.

Rory Staunton’s story has been seen by over one million people on the People.com’s webiste. The article and video featured on the internationally popular magazine’s site are part of an Irish family, living in New York’s efforts to raise awareness about the killer syndrome sepsis, which took this strong 12-year-old, six-foot, boy from their family five years ago.

Ciaran and Orlaith Staunton, parents of Rory, established the Rory Staunton Foundation after his death. On Tuesday March 27th, 2012, Rory cut his elbow playing basketball at school in Queens. Four days late he had died due to sepsis.

Sepsis, a severe and life-threatening reaction to infection, which kills more than 250,000 Americans each year, more than breast cancer, prostate cancer, and AIDS combined. Globally, it is the leading killer of infants and children. Despite this, 60 percent of Americans have never heard the word sepsis.

“When Rory died, I thought, ‘This has to be something really rare.’ Our son was 160 lbs. He was nearly 6 ft. tall. I did not think there was anything that could kill him within four days that I wouldn’t know about. And there was. And it’s the biggest killer of children in the world.”

The Stauntons couldn’t stay quiet about sepsis and the Irish couple took their lead from their civil minded son. Orlaith said “Rory wouldn’t sit around — he we wasn’t a passive kid, he was very involved in causes and very involved with a lot of social issues…  He would have wanted us to do something about this.”

And so, they have. Already the Stauntons have helped introduce Rory’s Law into New York State, which dictates that children must not be released from hospital before their test results are reviewed. They have raised awareness through their sepsis symposiums in Washington DC, discussed the matter in Senate and more.

Rory’s father, Ciaran said “You talk about statistics. We are a part of those statistics and we always will be. We lost 25 percent of our family. But between 1 and 2 million people died since Rory died. Our point was we had never heard about sepsis before he died. And yes, many people would have curled up — and we there have been mornings we felt like curling up. But we were angry.

“Sepsis was killing nearly 3.5 million people when Rory died, and the government agencies weren’t doing anything about it,” he continued.

“We organized the first series on the United States Senate on sepsis and when we met the members of the Senate, they didn’t have a clue what we were talking about. Can you imagine them saying, ‘Well, we never heard of that?’ It was almost like, ‘Are you sure?’ ”

“We’re not looking for a cure for it,” Orlaith added. “The cure is antibiotics and fluid. But the cure is also identification. And we need to give that knowledge and that power to parents, to children, and we need them to be able to be their own advocates. We’re not waiting for this amazing cure — we know the cure.”

The Stauntons told People that this year they’re publishing a children’s book to reach out to a younger audience. “Ouch! I Got a Cut” has been added to the New York State educational curriculum and its 1.9 million teachers.

“We’re very excited about it,” Orlaith said of the book.

“We really felt there was a real need to return to the basics of first aid. And we thought of an idea of having a campaign that would be the three C’s: Cut, Clean and Cover. If you get a cut, you clean it and then cover it. It’s a simple message but a really crucial one of children being aware of their bodies and what can happen to them.”

“The book will make a difference and it’s really great that little kids are going to learn in a non-scary way how to treat their wounds,” she continued. “We all know that our children didn’t need to die and we don’t want other parents to go through what we went through. It’s a life sentence and we want to make sure other families don’t have to go through it.”