Jonathan Doherty, an Irish father of two, is supporting the global Restart a Heart Day and paying tribute to the “heroes" who brought him back from a sudden cardiac arrest in June. 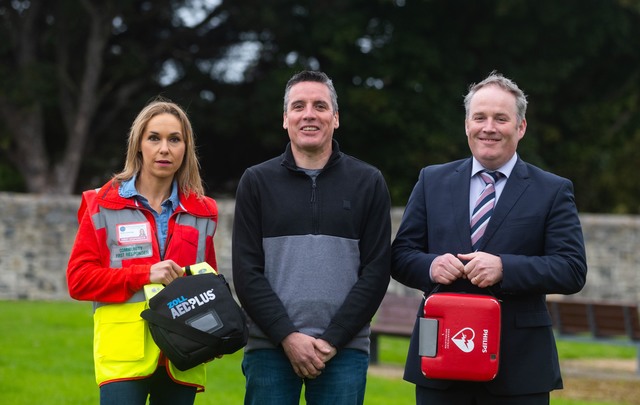 Restart a Heart Day: Jonathan Doherty and his heros.

Jonathan Doherty, 43, passed out at home in front of his wife Claire after returning from a 5k jog and would not have survived without first-responder neighbors, Deirdre and Jonathan Roughneen.

Now Jonathan, a quantity surveyor, is supporting global Restart a Heart Day this Sunday, (October 16), which urges everyone to know the location of their nearest defibrillator.

“I got home, jumped in the shower, and started getting pains in my left arm, I thought it was muscular from the run,” Jonathan said while recalling his brush with death in June.

“I was trying to shake it off and couldn’t so I got into bed and called Claire, telling her I didn’t feel too well. I didn’t realize it was a massive heart attack that would lead to a cardiac arrest.

“Claire called the ambulance service, they ran through some of the symptoms, and at the same time, they put a call through to the first responders.”

It could have ended in tragedy - the Roughneens were seconds away from leaving home for a cycle when they got the call to attend Jonathan’s home in Kiltale, Co Meath.

“They started CPR and did about 10 minutes, with two shocks of the defibrillator, which brought me back. The next strong memory I had was being in the back of an ambulance on the way to the Mater Hospital,” said Jonathan.

“If it wasn’t for them, I wouldn’t have survived. I’m here today because of the actions of people who are heroes.”

Now recovering with two stents in his heart, Jonathan, dad to Darragh, three, and eight-year-old Grace, also plans to train as a first responder.

A total of 2,906 people suffered cardiac arrest outside hospital settings in Ireland in 2021 – 74% of which happened in the home.

Ireland's CPR bystander rates – where a cardiac arrest patient is helped by a member of the public before an emergency team arrives – is 85%.

But less than 7% are getting defibrillators onto their chests before first responders or an ambulance arrives.

“Your chances of survival rise by 48% once an AED is used on you,” said Brigid Sinnott, Chairperson, Restart a Heart Group and Resuscitation Manager with the Irish Heart Foundation.

“Restart a Heart Day encourages people to be aware of the steps that they can take to save a life: recognize cardiac arrest early, call for emergency help, perform CPR and get the nearest AED.

“There may be an element of fear but remember that with CPR and an AED, you can do no harm. Make yourself familiar with your nearest AED and do not be afraid to use it. If someone is unresponsive and not breathing normally, they need CPR and an AED.”

“Early recognition, early CPR and early AED use are the keys to saving more lives. AEDs are very easy to use, so know where your nearest public AED is located because it could save someone’s life,” he said.

The Out of Hospital Cardiac Arrest Strategy Group has produced a video showing the life-saving difference that Check-Call-Compress-Shock makes:

The four simple steps to save a life are:

Check: is the person responding or breathing normally?

Call: emergency services on 112 or 999 and listen carefully to the instructions the ambulance call taker provides

Compress: start pressing on the center of the patient’s chest at a speed of 100-120 compressions per minute and at a depth of two inches or 5cms

Shock: If someone is with you, send them to get the nearest AED and get it on to the chest as quickly as possible.