President of Ireland Michael D Higgins and Taoiseach Micheál Martin are among the congregation for Queen Elizabeth II's funeral. 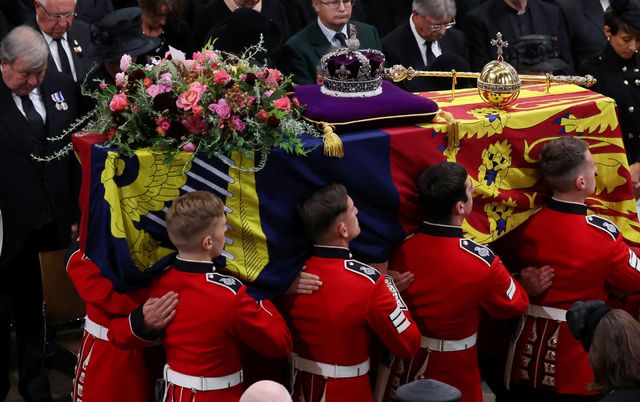 Taoiseach Martin said that he and President Higgins traveled to the late Queen's funeral "reflecting that admiration and respect" that people around the world and the Irish had for her.

The funeral is also being attended by senior religious figures, British prime ministers past and present, and several other European monarchs.

Queen Elizabeth II passed away on Sept. 8 at age 96, at her Balmoral residence in Scotland. Monday, Sept 19 was declared a public holiday in the United Kingdom by King Charles II to honor his mother's legacy.

The Queen's coffin was taken in procession to Westminster Abbey.

The Dean of Westminster, the Very Reverend Dr. David Hoyle, will say Queen Elizabeth II's final farewell: “Here, where Queen Elizabeth was married and crowned, we gather from across the nation, from the Commonwealth, and from the nations of the world, to mourn our loss, to remember her long life of selfless service.”

He will also speak of the Queen’s “unswerving commitment to a high calling over so many years” as Queen and Head of the Commonwealth.

“With affection, we recall her love for her family and her commitment to the causes she held dear,” the Dean will say.

One of the hymns - "The Lord’s My Shepherd" - was sung at the Queen’s wedding, when she married the Duke of Edinburgh in the same abbey, as a 21-year-old bride in 1947.

The service will conclude with a version of Britain's moving military trumpet reveille, "The Last Post," a two-minute silence, and then a lament from the queen's personal piper, who played his Scottish bagpipes outside her bedroom each morning. King Charles will place the camp color (a regimental flag) of the Grenadier Guards' Queen's Company, a British Army regiment, on his mother's coffin.

Following the funeral, the coffin will travel in procession from Westminster Abbey to Wellington Arch, from where it will travel to Windsor. The state hearse will then take the coffin along the Long Walk to St George's Chapel in Windsor Chapel, where a committal service will take place.

The Queen will be buried next to her husband of 73 years, Prince Philip.

The Queen will also be surrounded by her family in the burial spot: Her parents, King George VI, who died in 1952, and Queen Elizabeth the Queen Mother, who died in 2002, as well as her sister, Princess Margaret, who also died in 2002.