Irish sports superfan Jennifer was able to snap a rare selfie with Prince William in Co Kildare on the second day of his first-ever official visit to Ireland. 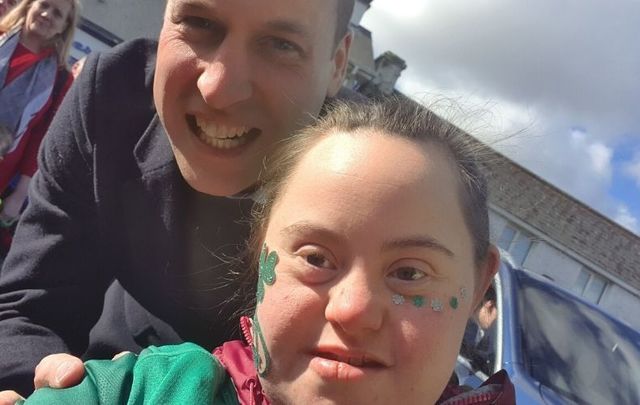 Prince William posed for a rare selfie with Irish sports superfan Jennifer while in Co Kildare on March 4. @donnamalone21, Twitter

Prince William broke royal protocol during his state visit to Ireland to pose for a heartwarming selfie with a young Irish fan.

While in Co Kildare on Wednesday during the second day of his first-ever official visit to Ireland, Prince William stopped to take a rare selfie with Irish sports superfan Jennifer Malone.

Members of the British royal family do not typically pose for photographs with the public, but the Duke of Cambridge decided to make an exception when Malone handed him a small bouquet of daffodils.

Jennifer is a huge Irish sports fan who has posed with a number of high-profile celebrities in the past, including Hugh Jackman and Irish rugby captain Johnny Sexton.

She scooped her most recent snap on Wednesday when the Royal Couple were visiting a supermarket in Prosperous, County Kildare to buy supplies for a local youth charity.

Jennifer's mother Donna tweeted about the incident and called the future king "a really nice guy."

The tweet has been liked more than 1,500 times as of Friday.

William and Kate visited a number of mental health and environmental charities on their second day in Ireland, before heading to the Museum of Literature in Dublin for a reception with Tanáiste (deputy Prime Minister) Simon Coveney.

The Royal Couple also laid a wreath in Dublin's Garden of Remembrance during their first day in Ireland.