The Duke and Duchess of Cambridge's final day in Ireland included a visit to Salthill Knocknacarra GAA club and stops in Galway City. 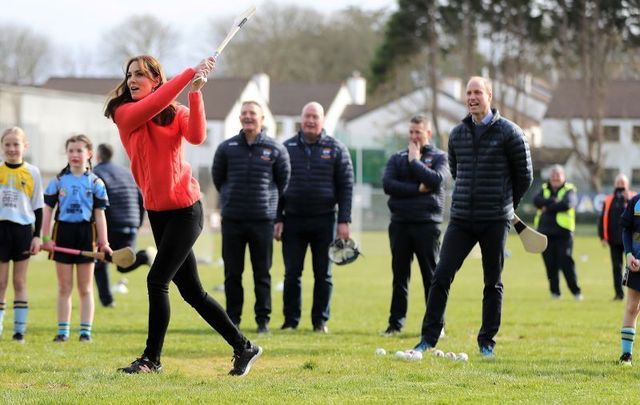 Kate Middleton tries her hand at hurling as Prince William watches on in Co Galway. RollingNews.ie

The Duke and Duchess of Cambridge concluded their first official state visit to Ireland by taking part in a local GAA training session.

The royal couple were visiting the west of Ireland on Thursday and traveled to Salthill Knocknacarra GAA club just outside Galway in the afternoon.

There they drew cheers from the watching crowd as they attempted to strike a sliotar (hurling ball) over the crossbar.

After two swipes at fresh air, Kate managed to successfully connect with the hurley and send the sliotar flying over the bar, drawing rapturous applause from the crowd.

William managed to connect on his first attempt, but he was wayward in his effort on goal.

The royal couple also engaged in a Gaelic football training drill with a number of children from Salthill Knocknacarra.

Both Will and Kate struggled with the concept of soloing the ball - volleying the ball back up to yourself while running - but both heartily took part in the drill.

Prince William also showed off his juggling skills during their first visit at the day at Tribeton - a newly-established urban restaurant and bar in Galway City.

The future king successfully juggled three balls but struggled to add a fourth.

William and Kate were also told about Galway2020, which sees the city assume the role of the European Capital of Culture.

All told, it was another successful day on what has been a hugely successful visit for the royal couple.

They drew large crowds wherever they went and the success of the visit can only strengthen relations between Ireland and Britain ahead of Britain's withdrawal from the European Union.