Prince Charles said in a statement that he looks forward to visiting Ireland again "once happier times return." 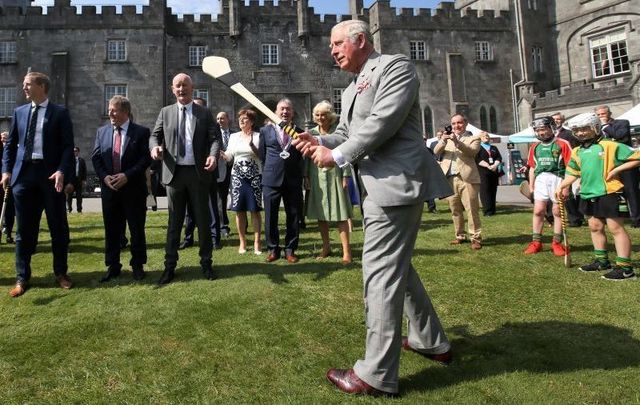 Prince Charles tries his hand at hurling while in Co Kilkenny during his 2017 visit to Ireland. RollingNews.ie

Prince Charles has visited Ireland every year since 2015

Prince Charles issued a statement expressing his regret that he will not be able to visit Ireland this year.

On May 19, The British Embassy in Dublin shared the remarks from Prince Charles:

HRH The Prince of Wales has sent the following message to the people of Ireland @ClarenceHouse @IrelandEmbGB #RoyalVisitIreland pic.twitter.com/RutYSnLebc

The statement read: “My wife and I cherish such special memories of our visit to Sligo five years ago, and of each of the visits we have made to Ireland every year since.

“Although it is a matter of particular sadness that, due to the current public health crisis, we are unable to visit Ireland and Northern Ireland this year, we very much look forward to visiting again once happier times return.

“Until we all meet together again.

“May you all remain safe and well."

The comments from Prince Charles were offered on the fifth anniversary of his and his wife Camilla’s visit to Ireland in 2015. During that visit, the couple visited Galway, the Burren, and Sligo, where they paid a special visit to Mullaghmore where the Prince’s great uncle Lord Mountbatten was killed in an IRA attack in 1979.

The Embassy of Ireland in Great Britain shared photos from the historic 2015 trip on May 19:

Looking back today on the 5th anniversary of the visit, by TRHs The Prince of Wales and The Duchess of Cornwall, to Galway, the Burren and Sligo, including a moving visit to Mullaghmore. A memorable visit for friendship, peace and #reconciliation. @ClarenceHouse @BritEmbDublin pic.twitter.com/zBsDa7YrmZ

Tanaiste Simon Coveney, head of Ireland’s Department of Foreign Affairs, replied in a tweet that the royals are always welcome in Ireland:

Thank you @ClarenceHouse - you are always welcome in #Ireland - we look forward to your next visit. Stay safe as both our islands work to move beyond #Covid19. @IrelandEmbGB #RoyalVisitIreland https://t.co/xw1gN6DqNC

Earlier this year, Prince Charles's son Prince William, the Duke of Cambridge, and his wife Katherine, the Duchess of Cambridge, visited Ireland for three days that included engagements in Dublin, Kildare, Meath, and Galway.