Prince Charles tries his hand at hurling during visit to Ireland

The heir to the British throne is enjoying what is becoming an annual trip to Ireland, visiting several attractions over a four-day visit. 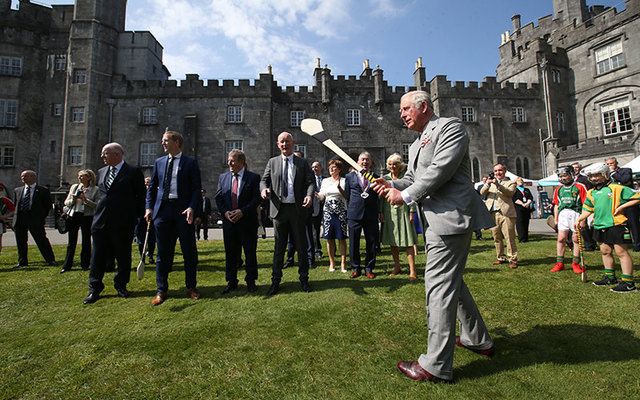 Britain’s Prince Charles has expressed his relief at not knocking out a member of the press corps after trying his hand at the Irish sport of hurling. As part of a four-day trip to Northern Ireland and the Republic of Ireland with his wife, the Duchess of Cornwall Camilla Parker Bowles, Charles was given an exhibition of the ancient sport before being urged to pick it up himself.

After former Kilkenny All-Star Henry Shefflin and Kilkenny hurling manager Brian Cody demonstrated the art of striking the sliotar with the hurl to the British prince, Charles described himself as being relieved "not to have disgraced myself entirely by missing the goal and hitting a member of the press corps between the eyes".

Shefflin was also impressed at his sporting prowess after such a short training session.

“He kept it low into the bottom of the net. His first question was how hard can you hit it, like anyone they want to see how hard you can hit it,” he said.

"But for the first go, it was very very good. Maybe if he was back here a few years ago Brian would have signed him up at some stage.

"It's a great occasion. It's just a sign of the times."

Prince Charles tried his hand at hurling during his visit to Kilkenny pic.twitter.com/qXXHLwmel8

This is the third year in a row that Charles has made a May trip to Ireland but the first visit since the Brexit vote in the summer of 2016. He expressed his wishes, however, that the trips would continue and expressed his desire to visit as many of the 32 counties of Ireland as possible during his lifetime.

"I hope and pray that during the rest of my life before I drop dead, I might have the chance to visit as many of the counties as possible in this great country," he said.

Prince Charles, HRH the Prince of Wales, and HRH The Duchess of Cornwall are presented with an image from The Breadwinner by Nora twomey, Director, Cartoon Saloon in Kilkenny during a visit to Kilkenny.

Speaking on Wednesday evening from the Irish President’s home in Áras an Uachtaráin, the British prince emphasized his support for continued good relations between the UK and Ireland, enforcing his belief that the reconciliation process was a good example to the world.

Although acknowledging the difficulties both countries face, he continued to say "our joint efforts have become a beacon for the rest of the world and I feel it is important to keep bothering you with my visits to demonstrate the United Kingdom's commitment to the peace".

The visit was the third by the Prince of Wales to the Áras, who first visited when Mary Robinson was President in 1995 and returned in 2002 at the invitation of her successor Mary McAleese.

Since then he has regularly met President Michael D. Higgins, most recently at the centenary commemorations of the Gallipoli landings in 2015.

From 1911 until the Prince’s visit in 1995, no senior member of the British Royal Family visited the Republic on official business, although Northern Ireland was a regular destination until the Troubles broke out. However, in recent years, the royal couple has carried out regular engagements in the 26 counties.

H.R.H. The Prince of Wales and President of Ireland Uachtarán na hÉireann Michael D Higgins with H.R.H The Duchess of Cornwall and Sabina Higgins at Aras an Uachtarain in Dublin this afternoon. Photo: Sam Boal/Rollingnews.ie

Their 2017 trip started in Co. Derry where they were shown around the Seamus Heaney Homeplace Center, followed by a trip to the nearby  Altnagelvin Hospital to meet staff working in the hospital’s cancer center.

On May 9, they attended a concert at the British Queen’s residence in Northern Ireland, Hillsborough Castle, and opened a memorial garden for the 13 members of the Police Service of Northern Ireland killed on active duty since the force was founded in 2001.

To conclude their trip, the pair will visit Glasnevin Cemetery to pay tribute to those who fought in the Easter Rising and the First World War.

H.R.H. The Prince of Wales Prince Charles speaking with officers from the British Army in the Curragh Defence Forces Camp in the Officer’s Mess with a picture of Padraig Pearse on the wall on Day two of their State visit to Ireland. Photo: Sam Boal/Rollingnews.ie

A spokesman for the royals said, "This visit will showcase the strength and vitality of the connections between the United Kingdom and Ireland; and the friendship and partnership that has defined our relationship over recent years.

"The Prince and Duchess's program will allow them to honor those men and women whose sacrifice in times of conflict shaped our two countries' shared history, and to celebrate all that we do together to cement peace and secure a prosperous future."