Pleasure and high emotions during Charles and Camilla's packed four-day visit to Ireland. 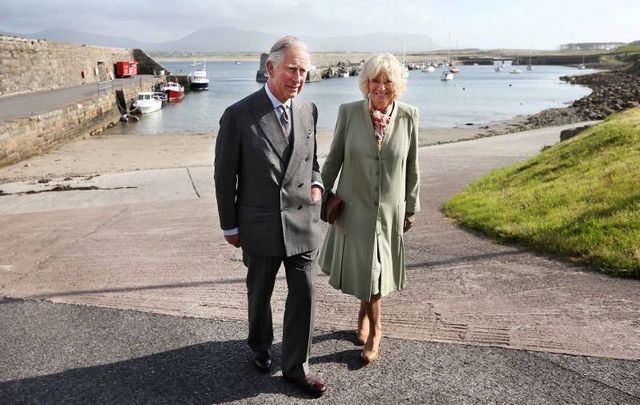 H.R.H.The Prince of Wales and H.R.H. The Duchess of Cornwall at Mullaghmore pier on May 20, 2015. RollingNews.ie

Prince Charles and the Duchess of Cornwall arrived in Ireland on Tuesday to start their historic four-day visit to Ireland. The Prince of Wales said he was excited by the prospect of his first visit to the Republic of Ireland in 13 years.

The highlight of Tuesday’s engagements was the historic handshake between the Prince and Gerry Adams. This is the first time a member of the British royal family and the Sinn Fein President, formerly a member of the IRA, have formerly engaged. They shook hands and spoke briefly at a reception in NUI Galway.

Their packed itinerary for Wednesday began with a trip to Lissadell House with a civic reception and a viewing of the Niland art collection at the Model contemporary arts centre, in Sligo. Mayor of Sligo, Sean McManus, formerly of Sinn Fein attended the reception. McManus’ son was killed in a gun battle with security forces in Northern Ireland, in 1992.

The royal couple will take part in a tree-planting and unveil a plaque. The theme of this service and the tree-planting will be peace and reconciliation.

Prince Charles will then visit Mullaghmore Harbour on Wednesday afternoon. On August 27, 1979, Charles’ great-uncle Lord Louis Mountbatten (79) was killed in a bomb attack executed by the IRA.

Mountbatten holidayed every summer at Classiebawn Castle near the harbor. He had, along with family and friends, embarked on a lobster-potting and angling expedition when a bomb on board was detonated just a few hundred yards from the harbor.

He died of his injuries, along with his grandson Nicholas Knatchbull (14), Paul Maxwell (15), from County Fermanagh, and Lady Brabourne (83), his eldest daughter’s mother-in-law.

Charles and Camilla will conclude their Wednesday itinerary with a trip to the Sligo races.

On Tuesday the couple, who landed at Shannon Airport, were welcomed by the Tanaiste (Deputy Prime Minister) Joan Burton at NUI Galway, among the guests were Gerry Adams and Martin McGuinness.

The went on to visit the Burren, in County Clare, fulfilling one of Charles’ life-long goals, by exploring the karst landscape for almost an hour.

They concluded their first day by dining with the President of Ireland, Michael D Higgins and his wife Sabina, at Lough Cutra Castle in south County Galway. They dined on blanched Highgrove asparagus to start, followed by pan-seared halibut, with panna cotta and poached Highgrove rhubarb for dessert.

On Thursday and Friday, they will travel to Northern Ireland. Their engagements will include a reception and a concert featuring a selection of local performers at Hillsborough Castle.

They will make a trip to Mount Stewart House and gardens, to mark the completion of a three-year restoration programme. A visit to Corrymeela, Northern Ireland's oldest peace and reconciliation centre, which celebrates its 50th anniversary this year, is also on the agenda.