The Prince of Wales and Duchess of Cornwall will visit Northern Ireland and Republic of Ireland over three-day trip. 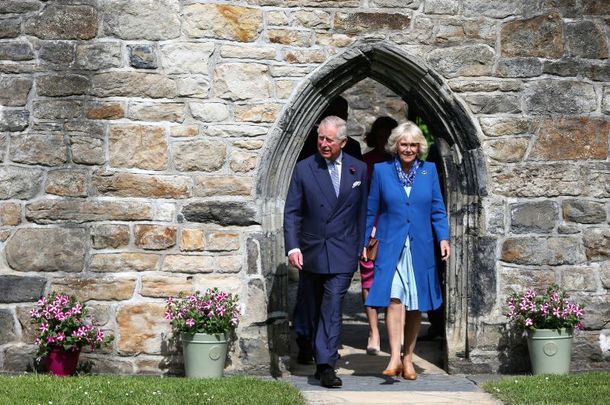 The Prince of Wales and the Duchess of Cornwall at Donegal Castle in Donegal Town on May 25, 2016. RollingNews.ie

Prince Charles has visited the birthplace of the Orange Order in Co. Armagh while on a three-day visit to Northern Ireland and the Republic of Ireland. The Orange Order remains a deeply sectarian institution which many leading paramiltaries on the Loyalist side belonged to during The Troubles,

Virulently anti-Catholic, the first leader of Northern Ireland James Craig stated "I am an orangeman first and a politician afterwards..all I boast is we have a Protestant parliament and a Protestant state."

In recent times Orange Order marches through Ctholic areas have become an annual source of tension every summer culminating on July 12th when hundreds of thousands march in Orange parades often headed by "kick the pope " bands as they are known.

Minister Humphreys has cited her own visit to the Orange Museum as an important part of the inclusivity of the 2016 commemorations, stating that the Prince’s visit both north and south of the border showcases the ever-improving relations between Britain and Ireland.

Describing herself as “delighted” to visit the museum, Humphreys said: “This is what I do in terms of commemorations and reaching out and being inclusive.

“Relations have never been better between the two islands .”

Prince Charles has been joined by the Duchess of Cornwall for the 2nd day of his NI visit. More at 6:30pm, BBC 1.https://t.co/dfQ80TH3Tl

On the second day of his Irish visit, Prince Charles visited the Co. Armagh Museum among a number of other engagements on Tuesday. He was joined by senior members of the Orange Order in Loughgall, First Minister Foster and by Minister Humphreys. He was welcomed by Orange Order Grand Master Edward Stevenson and the Co Armagh gGrand Master Dennis Watson.

Orange Order members taking the Prince on the museum tour showed the first-in-line-for-the-throne the parlor in which the loyal institution was first formed in 1795. The Order was first established following the sectarian conflict, the Battle of the Diamond, in which an estimated 30 Catholics died but no Protestants were killed.

The Prince of Wales was also shown a pair of riding gauntlets belonging to King William of Orange and a letter penned by the King before he arrived in Ireland.

Adjoining the museum is a memorial garden in honor of the 333 members of the Orange Order who lost their lives during the Troubles.

Prince Charles in Sloan's parlour where the Institution was formed @ClarenceHouse pic.twitter.com/0eFMFrSiB5

“We were delighted and honored to welcome His Royal Highness to the Museum of Orange Heritage in Loughgall,” said Orange Order Grand Master Edward Stevenson.

“Since opening last summer, Sloan’s House is proving to be a popular cultural resource and attraction for the entire community. Complementing our larger museum in Belfast, visitors to both sites have the opportunity to learn and engage with a rich, vibrant and evolving tradition that has played a significant role in Irish, British and world history.”

Earlier that day, the Prince and Duchess of Cornwall visited Portico Centre in Portaferry, Co. Down, a former Presbyterian church that has been transformed into an arts and heritage center at a cost of $2.2 million (£1.5 million).

Players at a local GAA club presented the Prince with a hurley.

Last night Charles and Camilla hosted an evening of music in Hillsborough Castle as part of the celebration of the 2016 Northern Ireland Year of Food and Drink.

On Monday, Prince Charles began his Northern Ireland engagements with a visit to the Institute of Electronics, Communications and Information Technology (ECIT) at the Northern Ireland Science Park in Belfast’s Titanic quarter

While in Donegal, the Prince was presented with the Royal Wedding Dolls produced by Donegal doll creator's Arklu, the dolls that set the company on the path to developing their own brand of wholesome, childhood inspired dolls called Lottie.

The Royal Wedding Dolls led to the start-up toy company developing Lottie, a childlike doll created to champion childhood values and the Stargazer Lottie doll was shown to the Prince of Wales during his visit to the Letterkenny Institute of Technology.

Read more: The first doll to ever travel into space is Irish, from Donegal (VIDEO)

The trip to Donegal will conclude with a visit to Glenveagh Castle where they will once again meet with Minister Humphreys. Glenveagh is located close to the home of the late artist Derek Hill, a great friend of the prince.

“It will also be good for Donegal from a tourism perspective; it showcases Donegal,” Humphreys said.

A spokesperson for the Prince stated: “The visits will recognize the warm friendship that exists between both countries, promoting understanding of their respective heritage and celebrating the best that each has to offer.”

This is the Prince’s fourth official visit to Ireland and takes place just over a year after he famously shook hands with Sinn Féin President Gerry Adams during his last official state visit in 2015. Prince Charles met with Adams in Co. Galway and the pair's handshake was regarded as historically significant. A 1979 IRA bomb killed Prince Charles' favorite uncle, Lord Louis Mountbatton.

The 2015 visit followed the state visit of Queen Elizabeth in May 2011 and Irish President Michael D. Higgins’ visit to Britain in April 2014. The Prince first officially visited the Republic of Ireland in 1995.

This year’s visit was organized at the request of the Irish government.