Fr Mark Hession who presided over funeral services for Senator Edward Kennedy attended by four US presidents has been charged with two counts of rape and several other charges. 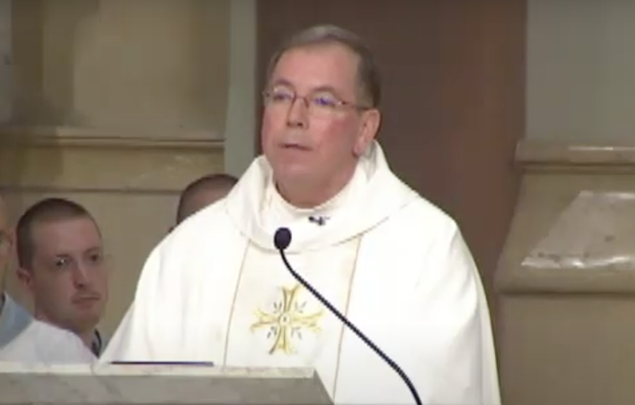 The Massachusetts Catholic priest is charged with "two counts of rape, one count of indecent assault and battery on a child under age 14, and one count of intimidation of a witness."

The priest who presided at the funeral of Senator Edward Kennedy, Father Mark R. Hession, has been indicted on rape charges.

In 2009 Father Hession gave the homily before four US presidents, Jimmy Carter, George W. Bush, Bill Clinton, and Barack Obama as well as Cardinal Sean O’Malley and many other dignitaries, and was widely praised for his words.

The Hyannis News stated: “A secret grand jury has indicted Mark R. Hession, also known as “Father Mark,” on two counts of rape, one count of indecent assault and battery on a child under age 14, and one count of intimidation of a witness.”

He is a former pastor at Our Lady of Victory in Barnstable, near  Boston, Massachusetts where many of the Kennedys worshipped and where Kennedy’s funeral mass was held.

He was placed on leave from “active priestly ministry” in 2019 after adult parishioners of Our Lady of Mount Carmel in Seekonk complained he was communicating inappropriately.

The diocese statement  said he had been deprived of ministry “because of conduct inconsistent with standards of ministerial behavior and in direct violation of the Code of Conduct for priests.”

“We gather today as a community drawn from across the nation to entrust the life of Senator Edward Kennedy into the hands of God, and to provide you consolation and support.

We bring with us treasured memories of Ted Kennedy, memories not only of a national leader, and a master legislator but of a beloved husband, a great father, a terrific grandfather, a sweet uncle, a dear friend, a trusted colleague, a wise mentor.”