A €100k reward is still being offered to anyone can who provide significant information about Trevor Deely, who was last seen in Dublin on December 8, 2000. 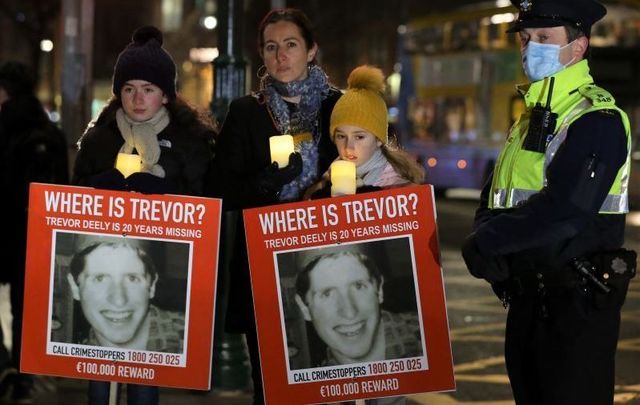 December 7, 2020: Michele Deely with her daughters Lily and Nina and members of the gardai at a vigil for the 20th Anniversary of the Disappearance of Trevor Deely. RollingNews.ie

Irish man Trevor Deely was last seen during the early hours of December 8, 2000 on Haddington Road in Dublin after having attended a work Christmas party.

The Garda Press Office shared a video on December 7 as part of a renewed appeal for information about Co Kildare man Trevor Deely, who was last seen in Dublin on December 8, 2000:

Gardai said on December 7: “On this day 20 years ago, Trevor Deely spent an evening in Dublin City socialising with colleagues at a Christmas function and never returned home.

“Despite a lengthy Garda investigation into trying to establish his whereabouts, he has never been found.

“An Garda Síochána appeals to anyone with any information, no matter how small or insignificant they may believe it to be, to contact the incident room at Pearse Street Garda Station on 01 6669000, Crimestoppers 1800 250 025, or any Garda station.”

Speaking from Pearse Street Garda Station in Dublin on December 7, Inspector Katherina Joyce said: “After spending the night socialising in Dublin city without incident, 22-year-old Trevor Deely was last seen on CCTV passing the Bank of Ireland ATM on Haddington Road, at approximately 4:14 am on the 8th December 2000.

“Our investigation continues to focus on trying to establish the identity of a man dressed in dark / black clothing pictured in CCTV footage talking to Trevor at a gate on Wilton Terrace at the rear entrance to Trevor’s workplace.

“We believe the same man can later be seen walking a short distance behind Trevor in CCTV footage at the Bank of Ireland ATM on Haddington Road, he has never been identified.

“This was the last known sighting of Trevor Deely and we believe the man pictured in this CCTV may have vital information that help us to solve this case. We would ask this man or anyone who can identify him to come forward."

Gardai have shared the below CCTV footage that shows Trevor Deely in the early hours of December 8, 2000:

According to The Irish Times, a reward of €100,000 from Crimestoppers is still available to anyone who comes forward with information leading to the location of  Deely or significantly progressing the case. 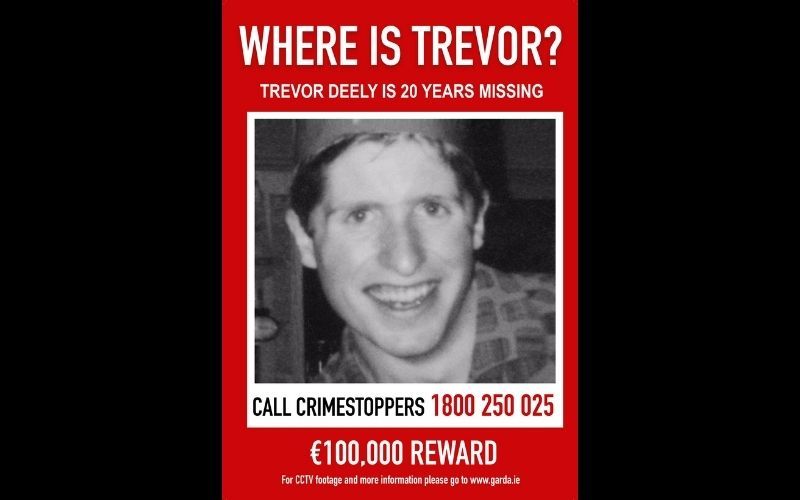 A poster appealing for information about Trevor Deely.

Also on December 7, gardai joined Deely’s family and friends in a vigil on Haddington Road in Dublin:

Family and friends of Trevor Deely with Gardaí from Pearse Street on Haddington road this evening at an event marking the 20th Anniversary of his disappearance. #WhereIsTrevor Investigating Gardaí have renewed their appeal for information - https://t.co/LXY0iuyaky pic.twitter.com/7RKubI6iwT

She added: “He is the baby of our family and we have spent the last two decades doing all we can to find him. But we are still stuck in the same place of not knowing anything beyond his last confirmed sighting at the top of Haddington Road.”

“You’re wondering about this and wondering about that. You just can never get away from it no matter if I drive down the country or walk out the town of Naas. It’s the same thing, there’s always something to remind you of Trevor.”