President Michael D. Higgins signed a posthumous pardon for John Twiss, who was wrongly convicted and executed for the 1895 murder of James Donovan. 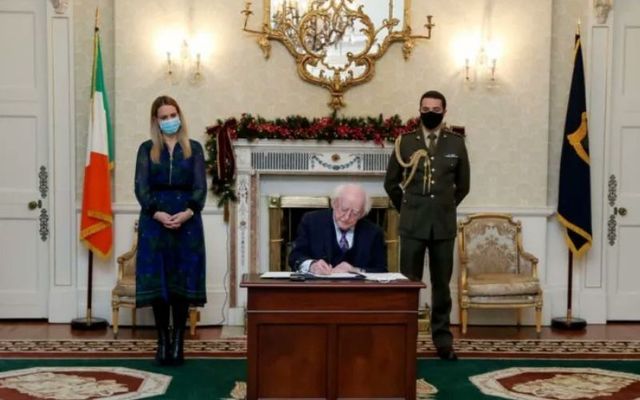 President Michael D. Higgins has signed a Presidential Pardon for John Twiss, who was wrongly convicted for murder in 1895 President of Ireland Twitter

Ireland's President, Michael D. Higgins, has signed a Presidential Pardon for John Twiss, who was executed in Cork Prison on 9 February 1895.

At a ceremony this week in Áras an Uachtaráin, President Micheal D. Higgins signed a posthumous pardon for a Kerry man who was hanged 126 years ago.

John Twiss from Cordal, outside Castleisland in County Kerry, was wrongly convicted and executed for the 1895 murder of James Donovan, a caretaker on a farm near Newmarket in County Cork.

Today’s pardon by @PresidentIRL clears John Twiss’s name and acknowledges an historic injustice. It is testament to the work of Helen O’Connor, John’s great grandniece, all her family, the Michael O’Donohoe Memorial Project and supporters like @BGriffinTD. pic.twitter.com/hEqTdpYhDs

The decision to recommend a pardon was announced after a full review of the case by the Department of Justice. It followed an extensive campaign by John Twiss's relatives and the Castleisland District Heritage Group.

In attendance was Helen O’Connor, great-grandniece of Mr Twiss, and her family as well as members of the Michael O’Donohoe Memorial Project, a group based in Kerry who have raised awareness of the case.

Ms. O’Connor remembers, as a child, her grandfather telling her about John Twiss and the terrible injustice done to him on the grounds of the flimsiest circumstantial evidence.

Mr. Donovan had taken care of a farm from which a family had recently been evicted. Mr. Twiss was a Fenian and a ‘moonlighter’ – a secret association set up during the Land War that fought against the eviction of tenants from their farms.

There was a huge public outcry over his conviction and at the time a petition was signed by 40,000 people calling for him to be spared. He was even the subject of appeals in the House of Commons.

According to the Independent.ie, Mr. Twiss had gone to his death warning the authorities that his name would be cleared and he gave a speech that went down in folklore, declaring: “I am satisfied to die, for I am innocent, and the man who was brought up for murder the jury discharged him, and now goes and brings me in for murder miles upon miles from the outrage, where it was committed, sleeping in my bed.”

President Higgins said the case had been one of "long-standing concern" for the people of Kerry, Cork and Limerick.

"While we at this remove cannot undo what happened, we do have the power to acknowledge that what happened to John Twiss was a great wrong. I am pleased to be able to formally grant a Presidential Pardon to him and to at least set the record straight.

This week's Presidential Pardon is only the sixth such pardon to be granted and the third posthumous pardon.

It is just the second occasion on which a pardon has been granted for a case predating the establishment of the State, following the pardon which was awarded by President Higgins to Maolra Seoighe (Myles Joyce) in 2018.