The special episode of Claire Byrne Live questioned whether it's possible for there to be a United Ireland. 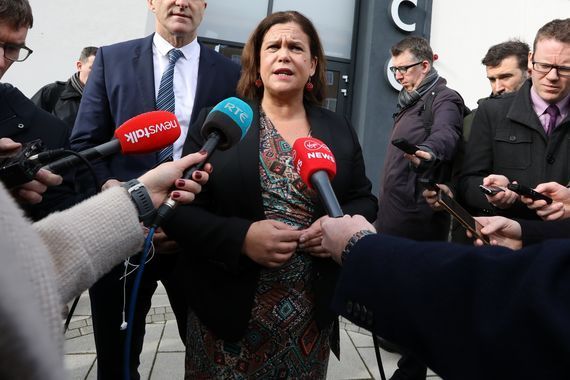 Irish leaders and public figures debated the issue of a United Ireland on Claire Byrne Live on March 22.

The current affairs show on RTÉ hosted a special episode on the long-standing discussion of a United Ireland.

Explainer: Following the Irish War of Independence, Ireland officially became a republic on Easter Sunday in 1949, while Northern Ireland (made up of six counties) remained part of the United Kingdom.

Joining Claire in the studio were Taoiseach Micheal Martin, Tanaiste Leo Vardakr, and President of Sinn Fein Mary Lou McDonald, as well as former politicians, historians, and figureheads with connections to Northern Ireland.

A recent poll taken by RTE's Claire Byrne Live found 53% of people would vote in favor of a united Ireland, 19% would not, and 28% were undecided.

The question of uniting Ireland is one that has been debated for years but isn't as easy as it sounds. The issue of the border creates economic and political obstacles, while people in Northern Ireland differ on identifying as either Irish or British.

The period of conflict known as the Troubles between republic and loyalist, British security forces, and civil rights groups is also fresh in the minds of many. This period time created years of violence and tension in Northern Ireland and many fear that a United Ireland could reignite these issues.

Former rugby player Andrew Timble gave a perspective on what life is like in Northern Ireland, and how the divide between Catholics and Protestants still remains embedded in society.

From a logistical point of view, Tánaiste (Deputy Prime Minister) Leo Varadkar, said that changing the use of the titles such as Taoiseach (Prime Minister) and Tánaiste would have to form part of a discussion about a United Ireland.

Leo Varadkar said these things would have to be considered as part of a wider conversation in the Republic about what people would be willing to do to facilitate the one million people who live on the island who identify as British.

Disagreements arose whether there should be a date set for a border poll. Former Taoiseach John Bruton said be believed suggestions that a unity referendum should be held in 2028 was "too soon," while the leader of The Alliance Party and the North's Justice Minister Naomi Long said people needed to rewind from talk of a border poll and discuss what a United Ireland actually means.

You can watch back on the United Ireland Debate on Claire Byrne Live on the RTÉ Player here.