Trump said he feels like he knows all the Irish people in the US - does he know you? (POLL)

In a phone call to congratulate Ireland’s new Taoiseach Leo Varadkar, Trump said “We have so many people from Ireland in this country. I know so many of them, too. I feel I know all of them.” We’re going straight to the source to find out if this is true. 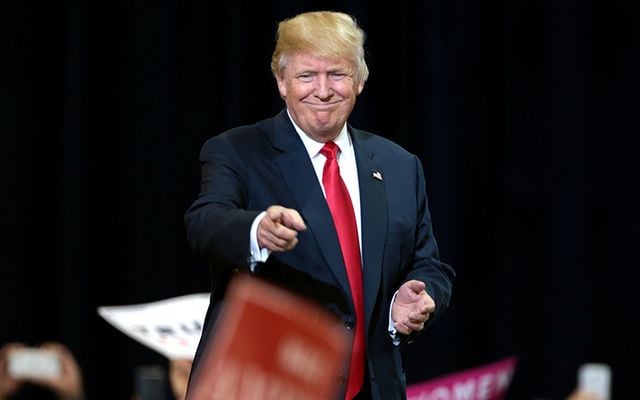 The phone call was unusual from the start, with Trump making the unexpected move of inviting a group of journalists into the Oval Office to listen to the start of the call, and then singling out Caitriona Perry, Washington DC correspondent for Ireland’s national broadcaster RTE, with a series of remarks about her appearance that have been widely condemned as flirtatious and sexist.

But wait, there’s more! Trump had a bit to say about how close he is with the Irish in America:

“We have so many people from Ireland in this country. I know so many of them, too. I feel I know all of them,” he said to Varadkar.

Could this be true? There are 34.7m Americans of Irish heritage according to the 2010 census data, and an estimated 50,000 undocumented Irish living in the US. It seems fairly safe to say that Trump hasn’t (knowingly, at least!) met any of the latter, but what about the former?

Trump says that he knows every Irish American. Pal, we never went golfing with you. You don't know us.

hi trump! irish american here. i don't know you but I would love to have a talk with you! https://t.co/PAxHHMMXWp

Trump to Leo V: "I know so many of the Irish people here in America"

Obviously you do?? you're fucking deporting them all, ye pox.

Interesting claim given the fact there are 34.5 million Americans with Irish ancestry. I am one of them and Trump does not know me

Trump has made a dedicated effort to engage with his supporters, embarking on a victory tour of the states he won in the lead up to inauguration and holding rallies. He even held the first campaign rally of his administration a mere four weeks into his presidency.

But in a recent study of political attitudes among Irish Americans, 47% reported voting for Clinton in the 2016 election, while 27% voted for Trump, so it does not correlate that he would have met a vast quantity of Irish Americans at his rallies.

There are a good few Irish Americans in Trump’s administration, like Vice President Mike Pence, White House Press Secretary Sean Spicer, and Chief Strategist Steve Bannon, but that only knocks a few off the 34.7 million.

In an effort to fact check, we thought we’d go straight to the source.

So tell us! Has Donald Trump met you? Does he know you? Please let us know in the following poll: