Trump singled out RTE's Catriona Perry, telling new Irish Taoiseach Leo Varadkar she has "a nice smile" and that he bets she "goes easy on him." 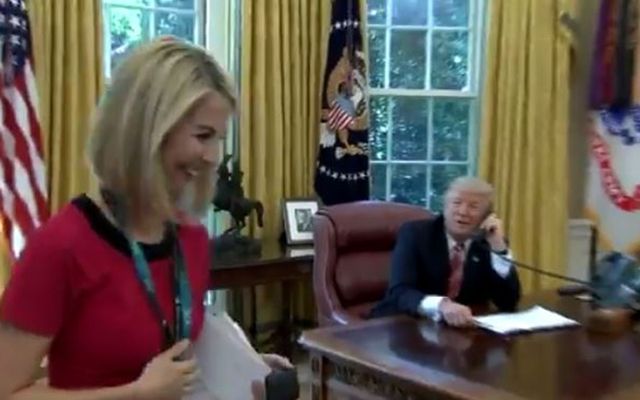 President Trump made a courtesy call to new Irish leader Leo Varadkar yesterday, but like everything else with The Donald, nothing worked out quite like it should have.

A group of journalists, including RTE’s Washington correspondent Caitriona Perry, was invited into the Oval Office to witness the call, which featured the usual expressions of goodwill on both sides.

Then Trump spotted Perry and what happened next caused a Twitter explosion. See below.

According to RTE, the "bizarre encounter" began when Trump singled Perry out of the crowd of journalists and beckoned her over to the Resolute Desk, saying:

"We have all of this Irish beautiful Irish press here. Where are you from? Come here, come here . . .

"She has a nice smile on her face so I bet she treats you well," he informed Varadkar.

"He thanks you for the newspapers, Caitríona," Trump added, which makes little sense as Perry does not work in the newspaper medium.

Perry later explained to RTE that the situation was unusual from the get-go:

"Usually we would shoot from outside the window of the White House and that's what we were expecting today but instead we were invited inside to witness the President's call to the Taoiseach. When we went in he was already on the phone but I must have caught his eye and he called me over."

Many Americans on Twitter reached out to Perry to apologize for their president's behavior:

It's hell to be objectified. When POTUS has no fear of doing that surrounded by cameras... I'm so sorry. Your success is more than a smile.

We apologize that our president is a weird, inappropriate creep.

He called you over to look you over. Gross. #EmbarassedForMyCountry

We apologize for this demented buffoon caveman, the admitted sexual predator, and are working on the problem. Please forgive us.