Of Irish Americans, Trump said to Leo Varadkar “I feel I know all of them” and told the new Taoiseach that a female Irish journalist had a “nice smile” before adding, “I bet she treats you well.” 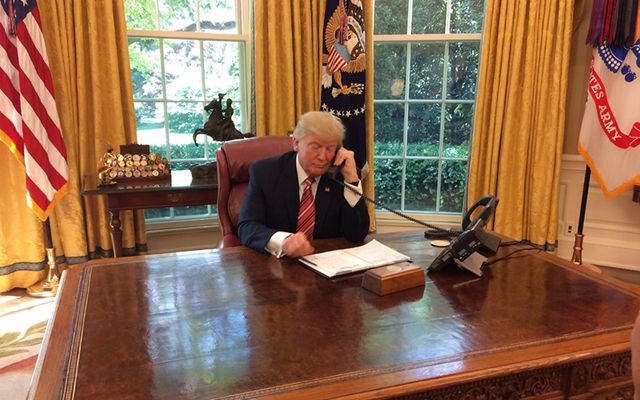 Trump made the call from the Oval Office, surrounded by journalists, photographers and White House staff.

"Congratulations on your great victory. We have so many people from Ireland in this country – I know so many of them, I feel I know all of them,” he told the new Taoiseach.

“But I just wanted to congratulate you, that was a great victory that you had".

The President also told Varadkar that, ”We have all this beautiful Irish press” and summoned over to the Resolute Desk RTÉ’s Washington Correspondent, Caitriona Perry. “She has a nice smile on her face,” he added. “So I bet she treats you well.”

Tells the new Taoiseach that there were Irish press in the Oval Office for his photo op congratulatory phone call to him. pic.twitter.com/RirBDHLZx5

In total, the call lasted between 10 and 15 minutes, after which the White House described the talks as “wide-ranging” and “fruitful”.

It’s understood that Trump reissued the long-standing invitation for the Taoiseach to visit the White House on St Patrick’s Day and the pair discussed the issue of the undocumented in America, climate change, and trade.

Trump also asked what Britain’s ongoing withdrawal from the European Union would mean for the Northern Irish peace process and the Irish border.

President @realDonaldTrump on the phone with Taoiseach Varadkar, congratulated @campaignforleo on his "great victory". @rtenews pic.twitter.com/UkhBl7B4n9

Trump’s first calls to world leaders have been known to cause diplomatic incidences; after his election, he accepted a phone call from the President of Taiwan - something that sparked outrage in Beijing, which refuses to recognize the country’s sovereignty.

His call to Australian Prime Minister Malcolm Turnbull in January ended abruptly after he reportedly told Turnbull he’d phoned numerous other world leaders that day but that, “this was the worst call by far.”

He later said that reports that the call had ended badly were “a little bit of fake news."