We can’t see any scandalous books or anonymous op-eds coming from Áras an Uachtaráin any time soon but the US President is certainly making a mark on the candidates putting themselves forward for the role this year. 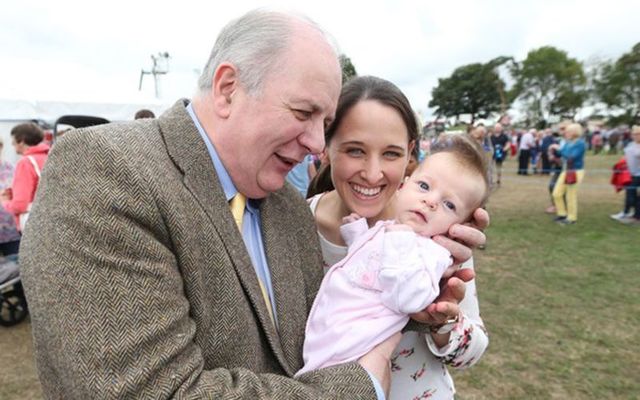 Three “Dragon’s Den” investors have their sights set on the Irish Presidency, just two years after President Donald Trump made the successful transition from “The Apprentice” boardroom to the Oval Office.

The role of the Irish President may not have as much power over the country’s politics and governance as the US Presidency. Yet, that isn’t to say that some in Ireland aren’t looking at President Trump’s successful move into politics and believing that they, too, can make the transition.

The Irish 2018 Presidential election is set to take place on October 26 and potential candidates are currently lining themselves up to secure the backing of the four local councils or 20 TDs or Senators that they will need to win their spot on the ballot paper. Incumbent Michael D. Higgins is already in the running as a first-term President always has the option to run for a second term without having to secure similar support.

In this morning's Indo we reveal that not one, not two but THREE 'Dragons' are fired up for #Aras18. https://t.co/hqG1AELD4U

Among the Áras an Uachtaráin (Irish President’s residence) wannabes we have seen so far, the likes of artist Kevin Sharkey has spoken about “Ireland First” immigration policies that emulate the 45th US President’s own views, while Sarah Louise Mulligan claims she is running on a Trump platform.

But is it, in fact, the reality-star businessmen who are showing the greatest influence Trump is playing on Irish politics?

There are currently three investors and businessmen from the Irish show “Dragon’s Den” seeking a candidacy: Peter Casey, Gavin Duffy and Seán Gallagher, who controversially came in second place in the 2011 Presidential election against Higgins.

Video confirming my decision to seek a nomination as an Independent candidate for the 2018 Presidential Election pursuant to Article 12 of the Constitution. pic.twitter.com/h1tVPCCrxx

Gallagher has very obviously made a previous attempt to step into the political arena, which may or may not have been thwarted by a dodgy tweet that RTÉ read out during the final debate, but this is also not Casey’s first foray into the election process.

The US-based businessman from Derry, the founder and chief executive officer of the global recruitment business Claddagh Resources, previously contemplated running as a candidate in the general election in the northwest and attempted to win a seat in the Seanad (Irish Senate) in 2016 but failed to secure a place.

Proud to have announced my candidacy for President of Ireland. I have been fortunate in my business life and I now want to give back to this country that has given so much to me. I would be grateful for your support in the coming weeks #Aras18 pic.twitter.com/UXzygKzgaj

In contrast, Duffy, the first of the entire presidential pack to secure a nomination in the race, has branded himself as being “not of politics,” despite having worked with several Taoisigh (Prime Ministers).

Thank you @louthcoco for hearing my presentation and for your excellent questions #Áras18 #Áras2018 pic.twitter.com/lnbytoJmGQ

With three reality TV stars now pitching for the Presidency, fans of Higgins have been active with the hashtag #KeepThePoet, emphasizing his connection with the arts and Irish culture instead of the business aspect of Irish life, which the role of the President has limited control over.

Your occasional reminder that as 1st Minister of the Arts, Culture & Hertiage, Michael D Higgins founded both the Irish Film Board & TG4, both of which have generated more jobs, money & investment in Ireland than all 3 “Dragons” combined... pic.twitter.com/XRsWG95eF1

So do the reality TV stars stand a chance against Michael D. Higgins? They’ll have to become candidates first.

Would you like to see a businessman take over the Irish presidency? Let us know your thoughts in the comments section, below.