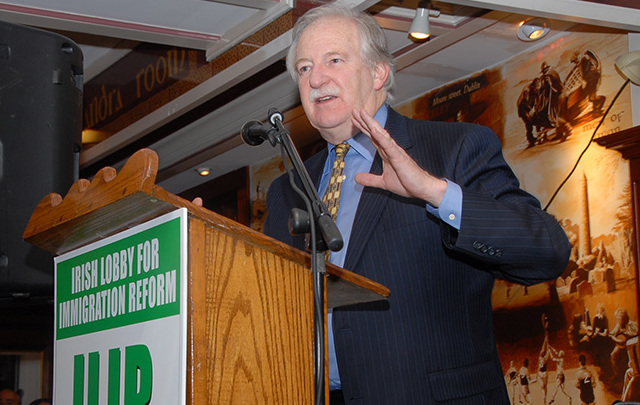 The new immigration bill, “Reforming American Immigration for a Strong Economy Act” (RAISE) Act, proposed by two Republican senators Tom Cotton of Arkansas and David Perdue of Georgia and which got the White House's backing on Wednesday, has been slammed as racist by leading Irish Americans on the issue.

Former congressman Bruce Morrison, author of the Morrison Visas, which delivered 48,000 green cards to the Irish in 1991, stated that the bill was “racist” and an attempt to divide.

It is rooted in an “us versus them” mentality and has “race at its core,” Morrison told The Irish Times.

“I don’t think that the Irish would be wise to grasp the racist, nativist approach as a good thing for the Irish.”

President Trump came out strongly in favor of the new bill which would cut legal immigration in half.

“This competitive application process will favor applicants who can speak English, financially support themselves and their families, and demonstrate skills that will contribute to our economy,” Trump said.

“This so-called ‘merit-based’ proposal from congressional Republicans and President Trump falls far short of that goal. It will shut out immigrants who are seeking a better life in America, without considering their history, their familial ties to the U.S., or their potential to contribute to our nation.

This is nothing short of an anti-immigrant and anti-family proposal from the GOP. I will work hard to ensure it is dead on arrival,” Crowley said.

The general consensus is that it is DOA with only about 30 Republican senators in favor out of 52 and all 48 Democratic senators are said to be opposed.

Morrison described the bill as “just PR” allowing Trump to say he was trying to reform the system.

Read more: Irish undocumented envoy in the US is a positive move to be supported