Appointment by the Irish government finally shows the commitment of the government to an issue of over 50,000 Irish living in the shadows. 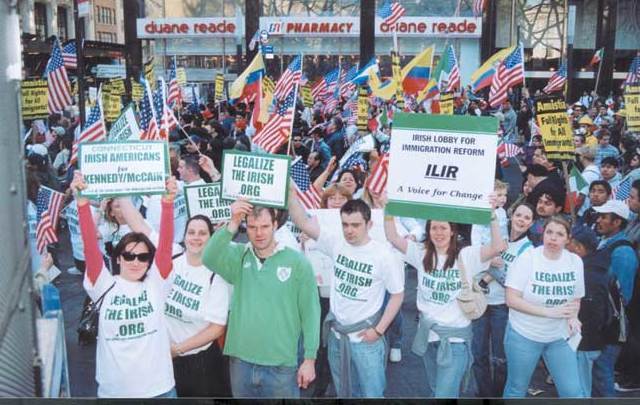 Irish Lobby for Immigration Reform protesting some years ago.

The appointment by the Irish government of a special envoy to deal with the issue of the Irish undocumented in the United States is a welcome one.

It finally shows the commitment of the government to an issue that has long been among the top two, alongside Northern Ireland, for the Irish American community.

The person chosen, John Deasy, a member of the Dail, has American political experience, having worked on Capitol Hill for a number of years after he graduated from college in Pennsylvania in 1990.

That should stand him in good stead given the fact that the issue of immigration reform is a deeply complex one, and an understanding of the ways of Washington is quite important.

As to what Deasy can achieve, if anything? It’s unclear right now.

If there is a more intractable issue in the United States, we have yet to come across it.

In the late 1980s-early 1990s, through the first two decades of this century, there have been deep and divisive differences between two highly motivated immigration lobbies.

President Trump seized on immigration as his main policy plank during his campaign, to attract an anti-immigrant following which stood him in good stead in many rural and working class areas of America.

He outrageously promised a wall dividing the United States and Mexico, a preposterous proposal that nonetheless caught fire with many of his right wing constituents.

Given that attacking illegal immigration benefited him so much, there can hardly be a more troublesome time to be coming to America to seek redress for the Irish undocumented.

But let us not eschew all hope.  In similar difficult circumstances, with widespread opposition, the Morrison and Donnelly visa programs were passed through Congress.

As the person who last passed successful immigration legislation for Ireland, former Congressman Bruce Morrison should be the first port of call for Deasy.

There is no one with such a complete knowledge of the issue. He is a person the Irish community is deeply indebted to for spending so much time on the issue.

What is needed is a coherent plan, one that likely avoids the pitfall of trying to create a new visa program.

There are two tools at hand. One is the E-3 visa program, created especially for Australia which has an unused portion of approximately 10,000 per year.

The Australians and the Irish have discussed this issue, and by the very fact that it does not involve creating new visas, the E-3 should be looked at as one of the two most viable propositions.

The other visa program is the annual diversity green card lottery which allows 50,000 from many nations to come to America each year.

This program was originally established at he behest of the Irish lobby and had an Irish set-aside, but that has since disappeared.

There is a powerful argument, given the extraordinary contribution of the Irish in America, that the diversity lottery should be re-shaped to give more Irish people a chance to obtain   Last year only 124 Irish were successful in obtaining one of the diversity green cards.

The Irish legacy in the United States is often underplayed, even by the Irish themselves. But it must be shown to be of importance to those who create immigration policy.

A set-aside from the diversity visa program would be no more than the Irish deserve as one of the great founding nations of America.

To those who would shout discrimination, the fact that the Irish now only get one-fifth of one percent of all legal immigration to America is a powerful counter-argument.

The third area that Deasy should consider is the J-1 college graduate program, which allows students to spend one year working in the U.S.  A major effort should be made to extend that to at least three years.

There is much to be done. We wish Deasy well. The Irish community should be prepared to work with him in whatever way possible.